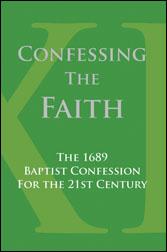 The 1689 London Baptist Confession of Faith has long been a treasured resource and teaching tool for Baptist churches. C.H. Spurgeon said of this confession in 1855:

“This ancient document is the most excellent epitome of the things most surely believed among us. It is not issued as an authoritative rule or code of faith, whereby you may be fettered, but as a means of edification in righteousness. It is an excellent, though not inspired, expression of the teaching of those Holy Scriptures by which all confessions are to be measured. We hold to the humbling truths of God’s sovereign grace in the salvation of lost sinners. Salvation is through Christ alone and by faith alone.”

Founders Press has made available a modern-language edition of the 1689 Confession entitled: Confessing the Faith: The 1689 Baptist Confession for the 21st Century.
The 1689 Confession has served churches well to promote doctrinal clarity and unity, and to keep us anchored in Scripture as our “only sufficient, certain, and infallible standard of all saving knowledge, faith and obedience.” So why the need for a new edition with updated language? Michael Haykin explains in the Foreword to Confessing the Faith:

“The truths that this confession promoted fell out of favor for much of the twentieth century, but in the last fifty years there has been a great recovery of gospel truth among Evangelicals and once again there are those deeply committed to the doctrines of this confession. The English language, however, has changed over time, and just as there are phrases in the Authorized Version (1611), also known as the King James Version, that are no longer as clear as they once were due to linguistic change, so it is the case with the 1689 Confession. For this reason, this new rendition of the confession by Dr. Reeves is indeed welcome. He has sought to render it readable by the typical twenty-first-century Christian reader, but with minimal change and without sacrificing any of the riches of the original text. I believe he has succeeded admirably in both of these aims.”

You can compare for yourself the original 1689 Confession and Confessing the Faith in a side-by-side excerpt of Chapter 11: On Justification.
From now through the end of the month (April 30, 2013) you can purchase a copy of Confessing the Faith from our online store at a special price: $1.00 for the digital edition for Apple iBooks and the Nook and for Kindle and Kindle Fire; and $3.00 for the print edition.
Ken Puls
Tweet Share
Get Founders
in Your Inbox
A weekly brief of our new teaching resources

Mercy Reigns only where Justice is Due

TS&TT: Jim Renihan | An Exposition of the 1689 Second London Baptist Confession of Faith

God is not Mocked