In 1982, a group of men committed to the doctrines of grace met in Euless, Texas to think about, pray for and plan efforts to encourage church leaders not only to see the full authority of God’s Word but also to affirm its sufficiency in all matters of faith and practice. After spending the morning in prayer, plans for a conference were developed and the first Founders Conference was held in Memphis, Tennessee the next year. The conference met annually there for the first 8 years, moved to Birmingham, Alabama from 1991 to 2004, and was hosted by churches in following years. Past speakers have included John MacArthur, J. I. Packer, Iain Murray, Al Mohler and John Piper. Themes have included missions, evangelism, revival, preaching, pastoral ministry, sanctification, the doctrines of grace, law and gospel and the church. 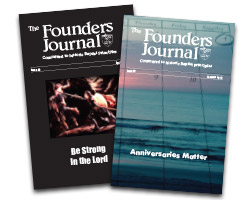 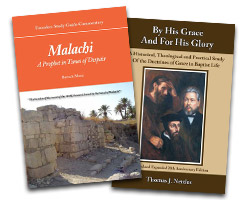 Two more ministries began in 1996. The Founders Press was established to provide literature that is consistent with the goals and principles of the original vision. With the explosive growth in the World-Wide Web as a means of publishing, we decided to go online in Winter 1996 to make the journal and conference information more widely available. In 2003 we launched the online Founders Study Center. The Founders Study Center is the Ministerial Training Academy of Founders Ministries. The primary purpose of the Study Center is to provide resources for men in the field who are serving in the gospel ministry or pursuing the gospel ministry. Through the Study Center we are able to bring biblically sound, in-depth courses of study to leaders throughout the United States and in many other nations. For nearly 35 years, God has shown his faithfulness through the generous support and sacrificial prayers of partners in the gospel.