A Lesson from the Conservative Resurgence in the SBC: The Need for Honesty 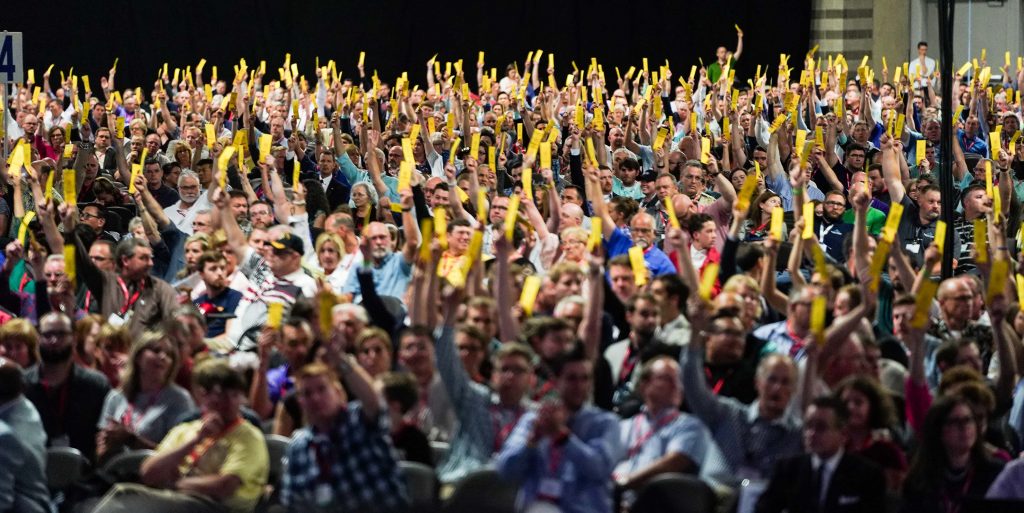 I attended my first annual meeting of the Southern Baptist Convention (SBC) in 1979 in Houston, Texas. I was pastoring a church 90 miles from there & had just enrolled at Southwestern Baptist Theological Seminary in Ft. Worth. That was the year that the “Conservative Resurgence” took its first official step with the election of Adrian Rogers as SBC President. A couple of years after that, Cecil Sherman, who was then pastor of FBC of Asheville, NC, came to campus to speak for a week of chapel services. He took the opportunity to address the “debate over inerrancy” that was raging in the convention.

Cecil and his brother, Bill, were strong proponents of the moderate/progressive faction of the SBC. They both became leaders in the moderate Cooperative Baptist Fellowship (CBF) that splintered away from the SBC in the early 1990s. Cecil was its founding coordinator. After listening to his second chapel address, I asked to meet with Dr. Sherman and he agreed. The next day we sat at a table in the student center and had a very candid conversation.

Sherman said things with which I completely disagreed. He said that the God of the Old Testament is not the same as the God of the New Testament. He said that I would have to check my mind at the door if I believed in a literal six-day creation. He said that the Bible obviously has mistakes in it and that some parts are more inspired than others. Dr. Sherman also said that, yes, Southern Baptists must have boundaries that limit the extent of friendly cooperation among our churches but that inerrancy simply wasn’t the right boundary.

Then he told me a story about his attempt to lead FBC Asheville to defund Southeastern Baptist Theological Seminary because he was disturbed over things being done and taught there. However, his deacons overruled him and he lost that effort. I did not know what was going on at that time at Southeastern, but I remember thinking that if Cecil Sherman thought it was bad, it must really be bad.

I walked away from that two-hour conversation (that ended with dozens of students and faculty surrounding our table, listening in) with three profound thoughts. First, I had a deep appreciation for Dr. Sherman. I was convinced he was a man of principle and unashamed to stand for what he believes. Two, I admired his honesty and candor. He did not mince words. He was clear in articulating his positions on biblical authority and various doctrines. Three, I realized that a man of his convictions could not cooperate together in a convention of churches with a man of my convictions.

Not long after that conversation I expressed my consternation to Dr. Russ Bush, one of my professors. I was frustrated because it seemed like many of the Christian leaders on both sides of the debate were either unable or unwilling to have open, honest, and public conversations about where they agreed and disagreed regarding biblical authority and related doctrines. I remember saying to Dr. Bush, “If everyone in this debate were as honest as Cecil Sherman, it would be over in 6 months.”

That was probably the hopeful naivete of youth speaking, but I still firmly believe that such honest, plain, unvarnished expressions of beliefs would have caused the conservative resurgence to have ended sooner and the painful, yet necessary, departure of the progressives to have taken place with less acrimony. For all of his admirable qualities, Sherman was clearly out of step with the rank and file Southern Baptist churches who built and comprise the SBC. The formation of the CBF under his leadership allowed the progressive Baptists to unite together around their common beliefs and practices.

The kind of honesty and candor that Sherman unashamedly displayed to me (and to others—research his debate with Paige Patterson in 1981) would go a long way to settling the controversies that currently plague the SBC. Is it too much to ask of those in leadership to be unambiguous in stating their views on key areas of biblical teaching?

Here are some questions that it would be great to have answered honestly and straightforwardly by SBC leaders and pastors.

The reason this is needed stems from the fact that at least 3 professors who were teaching at Southern Baptist seminaries (Dr. Curtis Woods, the chair of the committee, at Southern Seminary and Drs. Keith Whitefield and Walter Strickland of Southeastern Seminary) were on the 2019 Resolutions Committee that recommended CRT/I to the convention as “useful analytical tools” in Resolution 9.

This is needed because we have more and more voices claiming to be “complementarians” while advocating women preaching in the regular worship services of our churches. Most recently, 2021 presidential candidate, Ed Litton, has done this very thing (see here, here, and here). Dwight McKissic and I had an open and honest debate about this in 2019.

This is pertinent because Dr. Danny Akin hired Dr. Karen Swallow Prior to a faculty position at Southeastern Baptist Theological Seminary after she endorsed Revoice. The fact that Dr. Prior claims agreement with the Baptist Faith and Message and the Nashville Statement is supposed to alleviate the concerns of Southern Baptists. It doesn’t.

Calling for straight-forward answers to honest questions in the SBC is nothing new. The need for such candor is greater now than ever. It is obvious to me that we have within the SBC those who are comfortable using CRT/I as helpful analytical tools and are happy to have people with such views teaching and serving in our institutions and agencies. It is also obvious that we have those who have affirm women preaching in their churches. Others, it seems, are unashamed to endorse Revoice and its original mission to support, encourage, and empower “gay, lesbian, same-sex-attracted, and other gender and sexual minority Christians.”

What would be most helpful to Southern Baptist pastors and church members is to have everyone—especially those whose salaries we pay—to speak with “Cecil Sherman-like candor and honesty” about their views on such matters. Then we can determine if and how we can walk together as an association of churches.