Bindergate: An Appeal for Honesty and Integrity in the SBC 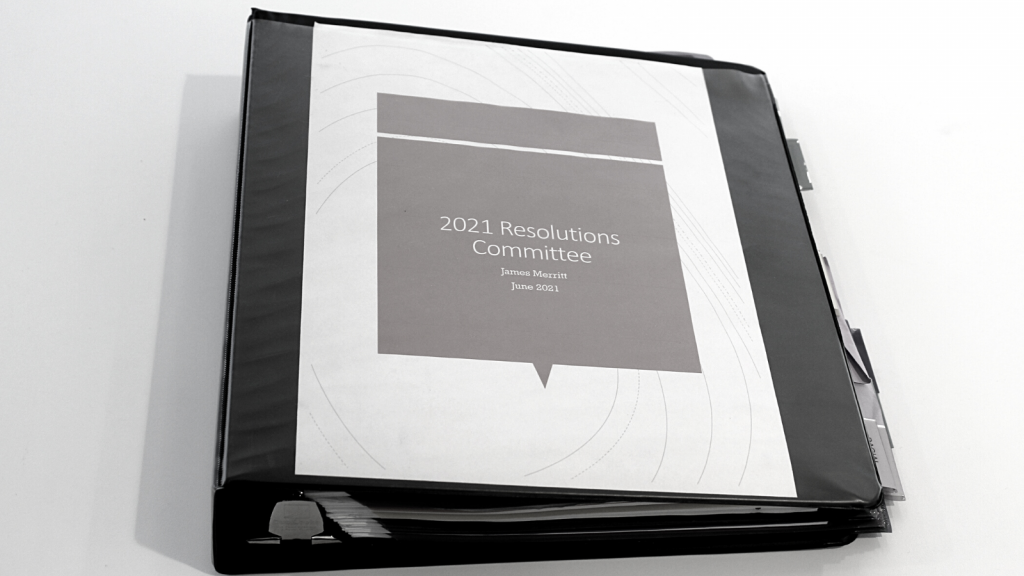 The Southern Baptist Convention (SBC) has a new scandal to add to its tragically growing list. Let’s call this one “bindergate,” because a black notebook binder with a red and white identification page is at the center of it. The following information is printed on that page:

That binder evidently contains private emails that I exchanged with James Merritt (who chaired the Resolutions Committee that recommended resolutions to the 2021 SBC annual meeting that met in Nashville, June 15-16). I wrote those emails in response to Dr. Merritt reaching out to me with specific questions before the 2021 annual meeting. In an April 20 email he asked me two questions:

1) What are your specific concerns concerning Critical Race Theory and how the Southern Baptist Convention has handled this issue? 2) What specific things would you want our committee to hear from you?

I answered him as directly and helpfully as I could the very next day. We exchanged a couple of more brief emails before the annual meeting.

I had not given much thought to those email exchanges until a reporter for the Tennessean newspaper notified me a few weeks ago that he had obtained copies of them and intended to use them in a story he was writing on the SBC. Liam Adams asked to speak with me several times for the story. For a variety of reasons I never responded to his request (I was beyond cell service part of the time; I don’t trust mainstream media; and I find it somewhat distasteful that a reporter would make private emails public without at least asking permission to do so).

Let me quickly note that I am not concerned that Adams quoted my private correspondence. I long ago decided that I would operate as if every word I say in any context is being recorded and that anything I write anywhere will be made public. After all, a day is coming when I will give an account for all my words to a much higher court than that of mere human opinion. My Lord said, “On the day of judgment people will give account for every careless word they speak” (Matthew 12:36).

So, I am not worried about my private words being made public in this way. I just think it is a slimy thing to do. Evidently it fits within the journalistic standards of the Tennessean, but I would like to think that Christians would have higher standards of ethics than that. Of course, while I might like to, I know better than to actually think that when it comes to certain SBC elitists. After all, this ain’t my first rodeo.

After Adams informed me in his third email to me (on November 18) that he intended to quote from my private emails to James Merritt, I contacted Dr. Merritt and asked him if he knew he had given my emails to Adams or if he knew how Adams had obtained them. Dr. Merritt called me the next day, while I was in Tennessee (which, as former ERLC ethicist, Philip Bethancourt reminded Southern Baptists is a “one-party consent” state when it comes to capturing audio secretly). He assured me that he had not given those emails to the reporter and that he had “no idea” how Adams obtained them. That conversation was the first time that I heard the word “binder” in connection with all of these shenanigans. Dr. Merritt said that Adams kept bringing up “some kind of binder” during an interview that he gave to Adams. Dr. Merritt assured me that he didn’t know what Adams’ meant by that.

In the story that Adams wrote for the Tennessean (which can be accessed here without a paywall) he states, “The documents, included in a binder that once belonged to James Merritt, the chair of the 2021 resolutions committee, include resolutions submitted on the subject of race and emails between top Southern Baptist leaders, including Greear.” I have since learned that a staff member from the ERLC is usually assigned to help the Resolutions Committee and that Executive Committee staff members would have access to their work room. Perhaps one of them could provide more information about this fiasco. I have also learned that it is not uncommon for each member of the SBC Resolutions Committee to have a binder with information related to their work at the annual meeting. That is understandable. What I do not yet understand is why the binder with James Merritt’s name on it and my private emails in it was given to the press.

In recent days we have heard a great deal about the need for transparency in the SBC. Calls for such have come from various sectors of the convention, including from the current SBC President. I generally agree with such calls. There was a time when Southern Baptist leaders tried to live by the old adage, “trust the Lord and tell the people.” Today that principle has morphed into “forget the Lord, just trust us, people.” But no association of churches can survive where the leaders call for trust from but eschew genuine accountability to the people they are supposed to lead. Much less can it survive when there is little or no fear of God demonstrated by leadership.

So, in the interest of transparency, and with full confidence in the power of the gospel to forgive any sin that may be involved and to strengthen any forgiveness that may need to be granted, I am asking for those who know how this binder made its way into the hands of the press to step forward and tell the truth. Southern Baptists have a right to know how something like this could happen. I have been informed that there are some whose salaries are paid by Southern Baptist churches who are in positions to know or at least to find out.

Perhaps the Lord would bless such a simple step of honesty and integrity to begin a deeply needed work of renewal among the people known as Southern Baptists.