After considering in my previous post some strong areas of agreement that I have with Bart Barber’s article, “Of Pastors and Presbyters,” I want to continue to interact on a few important matters that he mentions. I am thankful for what he wrote and appreciated his gracious spirit in doing so. However, on a few things I think it is important for us to probe further.

Of Baptists and Presbyterians

Instead, unlike Presbyterian churches, Baptist congregations with elder leadership polity continue as autonomous churches without external groups exercising authority in their polity, call of pastor/staff, doctrinal statement, buying property, etc. Baptist churches are autonomous congregations—period. So, full-fledged Presbyterianism falls outside the ecclesiological framework that Baptists have been part of for four hundred years. We cherish our autonomy! That does not change when churches adopt elder leadership. Historically, some stalwart Baptist churches divided their eldership into ruling and teaching elders (a practice that I personally reject as unbiblical). But none of them, as far as I’m aware, abandoned their autonomy. That’s why the indisputable movement toward Presbyterianism that Dr. Barber seems to be concerned might happen over time, does not square well with historical precedent among early Baptists who practiced elder leadership. He may be a prophet who has accurately foreseen that demise of Baptist autonomy (he and I both hope not!), but so far, the present examples of elder leadership that I’m aware of appear to be doing much of what some of our Baptist forefathers did in their polity.

History Speaks to the Present

Not all, or even necessarily most, early Baptists had elder leadership. But some did. For instance, the Philadelphia Baptist Association, notably the leading Baptist body in the colonial period, recognized staff and non-staff elder plurality in their local churches.ii Interestingly, when asked at the 1738 associational meeting if a man serving as a non-staff elder demonstrated gifts for preaching, and would be potentially called as a staff pastor, should receive the laying on of hands again (as ordination to serve as staff pastor), they affirmed that he should be ordained specifically as a staff pastor (they did not use the same staff/non-staff terms that we do, but the language clearly implies the same).iii In other words, while sharing equality in their leadership in the congregation as staff and non-staff elders, the churches recognized a distinction in the function and roles of those selected as elders. They did not all preach. But some who did were set apart for the preaching pastor office in local churches. They did not view that as creating a third office in the church but rather a different function of the elder/pastor/overseer office.

The Elkhorn Baptist Association of Kentucky, in their 1790 meeting, asked, “Whether the office of elder, distinct from that of minister, be a gospel institution or not?” In other words, is it biblical to have those who are not called as pastors—in our typical usage of the term—serving as elders in the local church alongside the church pastor(s)? They responded, “It is the opinion of the Association it is a gospel institution.”iv So they affirmed the distinction of non-staff elders serving alongside staff elders (pastors) in the churches with plural elder polity.

The examples of the Philadelphia and Elkhorn Associations serves to affirm that what many present-day SBC churches are doing by functioning with staff and non-staff plural elder polity, is not an oddity among Baptists nor should it be feared as moving toward Presbyterianism. Instead, it’s a recovery of the same elder plurality from previous generations of Baptists that began to wane in the late eighteenth and early nineteenth centuries. 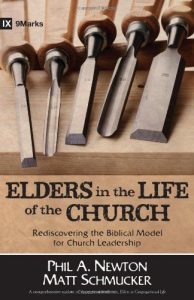 While I go into more details about this decline in plural elder leadership polity in Elders in the Life of the Church,v a dramatic shift in polity took place under the influence of the Baptist pastor, prolific writer, statesman, and church planter Isaac Backus. His background, steeped in Congregationalism and the experience of persecution by colonial religious hierarchies, caused him to emphasize a hyper-congregationalism while moving away from elder plurality in the considerable number of churches that he influenced.vi His disciple, John Leland, furthered Backus’s views. Leland, according to Edwin S. Gaustad, seemed to arrive at his position of “unmitigated congregational polity” due more to the influence of Thomas Jefferson than Holy Scripture.vii His emphasis on individualism caused him to reject elder plurality, fearing that it might threaten his version of congregationalism. Because Backus and Leland were two of the most prolific writers among Baptists in that era, their influence affected subsequent generations of Baptists.

The next couple of generations gained additional support for the Backus-Leland views on congregationalism and views against elder plurality. Francis Wayland maintained the same, if not stronger, view on individualism as that of Backus and Leland. He even considered church polities as historical accidents rather than New Testament normative teaching.viii The writings on polity and church life of Edward Hiscox and John Newton Brown continued the earlier practice of moving away from elder plurality toward a different model in Baptist life. When Landmarkist J. M. Pendleton wrote his Baptist Church Manual in 1893, published by the Sunday School Board of the SBC, any thought of elder plurality functioning within a healthy congregationalism appeared dead in the water! His book that influenced Baptists for a century is still available today.ix It offered a thoroughgoing congregationalism without even a hint of plural elder leadership. For a hundred years, Pendleton was the standard, so it is not surprising that many good Baptist brothers would fear a movement toward Presbyterianism by the introduction of elder plurality into Baptist churches. Pendleton’s influence that made elder plurality among Baptists a matter of forgotten lore, along with that of Backus, Leland, Wayland, Hiscox, and Brown, lingers today.

So, should we fear a movement toward Presbyterianism by the rise in plural elder leadership among Southern Baptists in the past twenty years? Let history make that call—absolutely not. Yet, much more important than even our heritage in issues of polity stands the teaching of Scripture. But more on that in another post.

i Emphasis by all caps is in the original post by Dr. Barber.

ii I realize that Baptist churches in the colonial and subsequent eras used different terms than we do to describe what we call staff and non-staff. So my use of these terms in relationship to them takes into consideration the gap in terminology between eras. I have tried to compare “apples to apples” in each example.

v Phil A. Newton and Matt Schmucker, Elders in the Life of the Church: Rediscovering the Biblical Model for Church Leadership (rev. and expd.; Grand Rapids: Kregel Ministry, 2014), 27–37.

vii Edwin S. Gaustad, “The Backus-Leland Tradition,” in Baptist Concepts of the Church: A Survey of the Historical and Theological Issues Which Have Produced Changes in Church Order, Winthrop S. Hudson, ed. (Chicago: Judson Press, 1959), 106, 122–123.