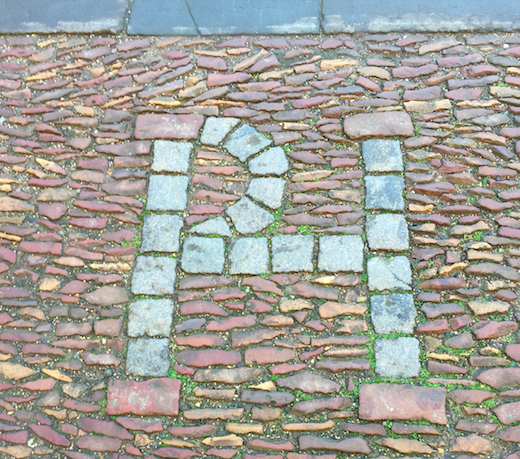 The January sea wind struck my face as I strolled outside the 15th century St. Salvador College and Chapel of St. Andrews University. On the cobblestone street just in front of the old buildings, stones marked out the letters “PH.” A sign identified the initials as the spot where Patrick Hamilton, “having been tried and found guilty of heresy” for preaching “Lutheran doctrines,” burned at the stake. The twenty-four year old in 1528 was “the first martyr of the Scottish Reformation.” His story challenges me.

Born around 1504 between Falkirk and Edinburgh, the exceptionally gifted Hamilton left as a teenager to study at the University of Paris. Erasmus had developed scholarly research at the university, especially in the study of the Greek New Testament. Hamilton embraced this study and began to see truth for himself. Although the university professors had no affinity for the Christian gospel, they did not stymie Hamilton’s desire to learn more. He read a defense that Philip Melanchthon penned against the Parisian scholars, and delighted in the way that he had taken them to task and riddled their arguments with Scripture. Wanting more, he left Paris for Wittenberg where he learned the reformation teachings around Martin and Katie Luther’s table. Luther and Melanchthon deepened his understanding of God’s Word. In either Paris or Wittenberg, Patrick Hamilton became a zealous follower of Christ.

Leaving Wittenberg, he traveled to Marburg to spend time with Bible translators William Tyndale and John Frith, future English martyrs. Hamilton wrote a small book, Patrick’s Places that explained salvation by the grace of God through Christ alone, while warning against the tendencies to think of grace as an opening to Antinomianism.

To Scotland with the Gospel

Convinced that he needed to see family and to take the gospel to Scotland, Hamilton left the Continent for the certain danger of a rabidly Catholic Scotland. In 1527, he returned home and preached throughout neighboring parishes, proclaiming the way to God through Christ alone. One writer said, “Never did the silver trumpet sound more sweetly or more richly; and as it fell on the ears of men who had never heard it before, it was at once recognized as the trumpet of heaven.” John Knox wrote of Hamilton’s preaching, “The bright beams of the true light which by God’s grace was planted in his heart began most abundantly to burst forth as well in public as in secret.”[1] People listened to the gospel, fell under conviction, and came to faith in Christ.

But when this happens among religious leaders who know nothing of the saving grace of God, strong reaction occurs. They grow jealous and bitter that people would follow the teaching of others and not their own.

The common man’s hunger and thirst to know the living God, to understand truth that would assure him of right standing with God, gave Hamilton a platform of eager hearers. He declared, “He that lacks faith cannot please God. . . . It is not sufficient to believe that Christ is a Savior and Redeemer but that he is your Savior and your Redeemer.”[2]

The result of his gospel preaching, according to the bitter invectives of his opponents, was the common refrain, “The ‘reek’ of Patrick Hamilton . . . infected as many as it blew upon.’”[3] Reformation emerged in Scotland.

St. Andrews’ Archbishop James Beaton gained his position through power politics. Hamilton’s preaching threatened his power and luxurious lifestyle that he enjoyed on the backs of the people of Scotland. Gospel proclamation would erode his position. Yet he couldn’t arrest him in his home area since Hamilton’s clan would stop the soldiers. Hamilton’s kinship with the royal family would also lead James V to dismiss any charges. Beaton schemed to invite Hamilton to St. Andrews to “discuss the state of the church in Scotland and the steps that might be taken to reform her.”[4] Meanwhile, arrangements for James V, the young Scottish king, to visit the Highlands far from St. Andrews kept the king away. The archbishop and his allies went to work. Foreseeing his impending death, Hamilton let his family know that they would likely not see him again.

The wily Beaton invited Hamilton to preach freely in St. Andrews in order that he and his allies might have ample charges to make against him. He preached for close to a month with much blessing. His gospel proclamation impacted the city with new converts.

One of the city’s monks thought that he could recover Hamilton for the Church of Rome. Yet with whatever arguments he set forth, Hamilton corrected them through the Word of God, along with a gentle and courteous spirit. Alane, the monk, talked with him several times, and eventually put his trust in Christ alone.[5]

As the archbishop closed in, Hamilton’s friends urged him to leave, knowing that he would soon be arrested. He courageously responded, “I came here to strengthen the faith of believers by my death as a martyr to the truth; if I turn back now, I would lay a stumbling block in their path, and might cause some of them to fall.”[6]

Heresy Charges and the Stake

Early on February 29, 1528, at the age of 24, guards arrested Hamilton and put him in the archbishop’s castle dungeon, as the crowd of bishops, abbots, and professors headed for the heresy trial in the cathedral. What were their charges?

1. That the corruption of sin remains in children after their baptism.
2. That no man by the mere power of his free will can do any good.
3. That no man is without sin so long as he lives.
4. That every true Christian may know himself to be in a state of grace.
5. That a man is not justified by works, but by faith only.[7]

As you might guess, the Catholic authorities condemned him as a heretic and rushed the same day to have him burned at the stake in front of St. Salvador College. When Hamilton arrived at the place, he gave his coat and New Testament to a friend with these words, “These will not profit me in the fire; but they will profit you. My death will be an entrance to eternal life, which no one shall possess that denies Christ Jesus before this wicked generation.” The local officials gave him one last chance to recant, but Hamilton responded, “I am content that my body burn in this fire for my faith in Christ, than my soul should burn in the fire of hell for denying it. I trust in the mercy of God.”[8]

The blaze rose up but soon flamed out due to a mist and dampened logs. Hamilton’s hand and face burned but he patiently waited as someone went to the castle for dry powder to set off the blaze again. The ordeal took six hours before he was finally burned to death. Throughout the execution, Hamilton exhorted the onlooking crowd to turn to Christ. Many did, including professors and students at the university.

When the flames were upon him and a Friar Campbell called for him to recant, Hamilton spoke prophetically, “You wicked man, you know that I am not a heretic, and that it is the truth of God for which I now suffer; so much did you confess unto me in private, and thereupon I appeal you to answer before the judgment seat of Christ.” Campbell died a horrible death before the year ended. But rather than Hamilton’s death stopping the work of reformation, it caused it to burst forth with more power.[9]

Hamilton’s martyrdom led the way for more courageous Scots to lay down their lives for gospel reformation. Biblical reformation remains the call to take up our cross and follow Jesus (Luke 9:23).

1. Wm. G. Blakie, The Preachers of Scotland: From the Sixth to the Nineteenth Century (Edinburgh: Banner of Truth, 1888 reprint, 50.