Is Calvin Guilty of the Popular Charges Against Him? 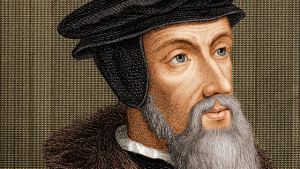 These barbs are most often lobbed at the “ism” suffixed to the surname of a famous Protestant Reformer from Geneva and not so much the man. But are these charges fair to Calvin himself? Do Calvin’s modern-day opponents really know Calvin’s theology? By this, I mean: Have they actually read Calvin on any of the issues on which they so confidently pontificate? I grant that it really isn’t Calvin who matters in the end on these issues, for the Scriptures, and not Calvin, are our final authority for doctrine and practice.

Still, it seems virtually axiomatic that the opponents of Calvinism, particularly some in the SBC, have never seriously engaged Calvin. Few (Of course, I grant that there are exceptions) of the staunchest critics of the doctrines of grace seem to have never read Calvin. Doesn’t the ninth commandment at least insinuate that we owe our neighbor the benefit of researching his sentiments on a given issue before we trumpet forth a blanket dismissal of them?

Even a cursory reading of Calvin’s commentaries, his sermons, his pastoral letters and his magnum opus, the Institutes of the Christian Religion, conspire to demonstrate that Calvin is innocent of the many of the popular charges leveled against his soteriology. A few samples from Calvin’s own words answer these charges quite well (For a fuller treatment of Calvin and these issues, please see my forthcoming book from Crossway with Michael A.G. Haykin, To the Ends of the Earth: Calvin’s Missional Vision and Legacy).  Let us allow Calvin to speak briefly to four often-heard critiques of his soteriology:

Charge 1: Those who believe the doctrine of predestination cannot offer the gospel to all without exception.

Calvin: “But I say nothing on that subject, because it has nothing to do with this passage; for the Apostle (Paul) simply means, that there is no people and no rank in the world that is excluded from salvation; because God wishes that the gospel should be proclaimed to all without exception. Now the preaching of the gospel gives life; and hence he justly concludes that God invites all equally to partake of salvation.” (Calvin’s Commentary on 1 Tim. 2:4)

Charge 2: Those who follow Calvin’s soteriology redefine “world” in John 3:16 to make it fit within a limiting theology.

Calvin: “For he intended expressly to state that, though we appear to have been born to death, undoubted deliverance is offered to us by the faith of Christ; and, therefore, that we ought not to fear death, which otherwise hangs over us. And he has employed the universal term whosoever, both to invite all indiscriminately to partake of life, and to cut off every excuse from unbelievers. Such is also the import of the term World, which he formerly used; for though nothing will be found in the world that is worthy of the favour of God, yet he shows himself to be reconciled to the whole world, when he invites all men without exception to faith in Christ, which is nothing else than an entrance into life.” (Commentary on John 3:16)

Charge 3: A belief in predestination undermines the impulse for evangelism.

Calvin: Calvin, quoting Augustine, labeled using predestination an excuse for slothfulness in Gospel proclamation lazy and evil: “If anyone addresses the people in this way; ‘If you do not believe, the reason is that you have already been divinely destined for destruction,’ he not only fosters sloth but also gives place to evil intention.  If anyone extends to the future also the statement that they who hear will not believe because they have been condemned, this will be cursing rather than teaching.  Augustine therefore, rightly bids such men begone from the church, as foolish teachers or perverse and foreboding prophets.” (Institutes, 3.23.14).

Charge 4: An adherent to Calvin’s view of the atonement cannot say to a sinner, “God desires your salvation and if you repent of your sins and believe in Christ, you will be saved.”

Calvin: “Now all are called to repentance, and the hope of salvation is promised to them when they repent: this is true, since God rejects no returning sinner: he pardons all (who come to him) without exception.” (Calvin’s Commentaries; ironically, this statement is taken from the reformer’s comments on Ezekiel 18:23, “God takes no pleasure in the death of the wicked.”)

These examples represent a minuscule sampling drawn from the thousands of words Calvin wrote and published in the service of his significant ministry in 16th century Geneva. Calvin was and remains a public theologian who published dozens of volumes expressing his views on the Bible and theology, the vast majority of which remain available and open for perusal.

Let the opponents of Calvin’s thought study the works of the great reformer before they draw such sweeping, dismissive conclusions about his theology and those who generally agree with his understanding of God’s grace in the salvation of sinners.