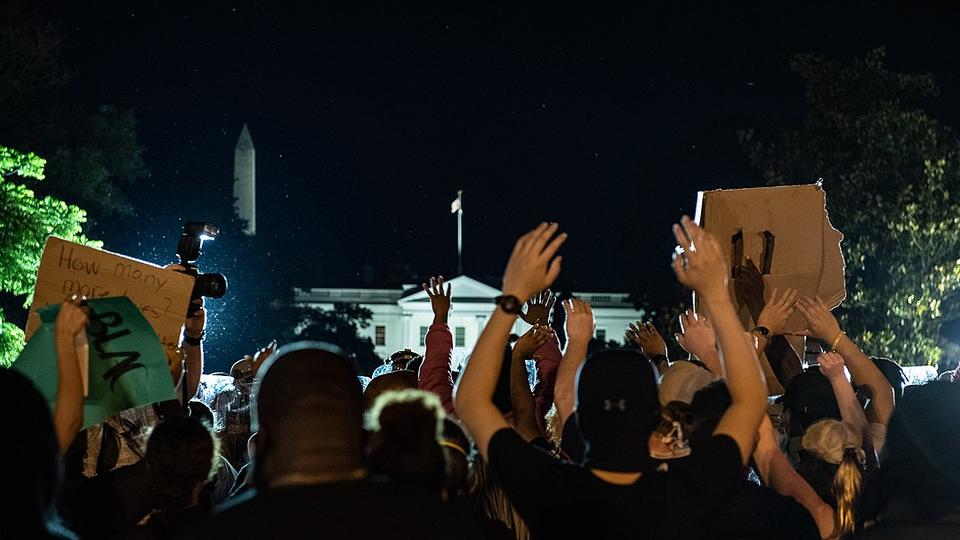 The recent days in America have been tragic. Our present unrest began with the senseless killing of George Floyd by a Minneapolis police officer. Rather than grieve and seek true justice, many have gone to set America on fire. This article is an attempt to make sense of things from a Christian perspective. Admittedly, it is a bit more of a machete than a scalpel. But given the terrain we are currently in, the machete seems fitting.

The apostle Paul adds an unexpected phrase in one of his letters to Timothy. After speaking of the coming perilous times, and the rampant wickedness of men in those times, he says people will have “a form of godliness” but deny its power (2 Timothy 3:5). This “form of godliness” gutted of substance is precisely what is going on around us. And pretty much everybody is guilty. We are watching the erosion of the Christian faith while everyone masquerades as Christian.

This is not, however, the first time such a thing has occurred. You can see the draining of Christian substance while maintaining a form of it in a string of paintings from the 15th century.[1] In 1435, Van Eyck painted the Madonna of the Chancellor Rolin, in which Chancellor Rolin sits facing Mary. Mary looks about how you’d expect she should. She has both the form of Mary and the substance of Mary. But, in Filippo Lippi’s painting of Mary some years later he made a change—he painted his mistress as Mary. In Lippi’s painting you have the form of Mary, but in substance, a scandal. Things unravel further with Fouquet’s painting of Mary in c.1450 (Virgin and Child). He paints the king’s mistress, Agnes Sorel, as Mary. He paints her with one breast exposed (not feeding the Christ-child). The painting speaks for itself (I leave it to your discretion whether to look it up). It has moved far afield from Van Eyck and Lippi. Even secular analysis marks it as “impious” with a flavor of blasphemy. The form barely remains; the Christian substance is dead.

America is Fouquet’s 1450 Virgin and Child. We have reached the end of the line. The substance is gone, but a number of people are still holding on to the form of Christianity. While doing so, they are trying to convert others to their paganism dressed in Christianity. But if the substance is gone, then anyone converted will join a false religion impersonating the true religion. Many evangelicals are busy trying to reconcile this false religion with the true Christian faith. But they cannot be reconciled. Others, perhaps who do not grasp exactly what is going on, try to harmonize the two. They labor for common ground with the spirit of the age. But there is no common ground. There is no harmony.

The rioters presently in the streets of the United States engage in violence and anarchy. But they claim a form of godliness. There indeed are many peaceful protestors. Some have displayed a Jon Jones like courage by shutting down rioters. Good on him and them. But the rioters themselves are a different story. They justify their lawlessness by saying they have not been heard. Their actions are righteous, reasonable, and what other people need to do is sit down and listen. If you are on the side of the oppressed (like Jesus) then you must be on their side. If you desire the sanctification of our nation, then put on your mask and throw that brick through a window. Let your voice be heard. Black lives matter, don’t they? What we are observing is not merely a group of misguided adolescents. We are observing rebellion driven by a religious impulse. The rioters are crying out to their governmental gods much like the false prophets cried out to Baal to send fire. They claim to have a holy mission. But there is only a shell of godliness here, no power.

The president, after giving a recent address about the riots, went to the historic St. John’s church in Washington. This church had been set on fire during the riots. He stood in front of the church with a Bible in his hand for a few minutes, then departed. This symbolic statement is open to interpretation. Even so, honest Americans know that pious is not a word that characterizes our president. Yes, Christians can genuinely give thanks to God for the judges President Trump has put in place. But we can do so while seeing what is missing from the president’s trip to that church. When recently asked if he prays and if he had grown in his faith, he responded by saying he had done so much for religion. He quickly proceeded to warn that if the radical left takes over, “you won’t have anything.” Here again we see an appearance of godliness, but no power.

The evangelical response to our troubled times has been elegantly vacuous. Christian leaders have justified lawless riots. Many have promoted organizations that advocate wickedness. A number of evangelicals and churches participated in black out Tuesday without knowing what it was. While there are some who have addressed our times with conviction (see Tom Ascol’s recent post). Many evangelical leaders appear to be posturing without getting down to the real issue. Danny Akin, president of Southeastern Baptist Theological Seminary, wrote an open letter which says, “We will refuse any and all attempts to politicize the death of George Floyd and the racial divide that plagues our nation.” Only a few sentences later he writes that a way to fight the good fight is to identify societal systems where people of color have little or no voice, and “lobby for equal representation and vote for candidates who will do the same.” A common term for what we are seeing many evangelicals do is virtue signaling. But consider what that term describes. Evangelicals signal that they are virtuous while in reality being the opposite. They claim to seek justice and equality while in truth they pursue the praise of man. Like Fouquet’s painting, evangelicals signal religion, but we are neglecting the substance and power.

How Did We Get Here?

Schaffer once said that if the lower story becomes untethered from the upper story, then the lower story devours the upper story. This is precisely what is happening. And Christians have to take responsibility for their part in letting things get here. Jesus came in the flesh. If you teach that he didn’t, then the apostle John says you are antichrist. But we have lived for some time as if Jesus is just an idea and Christianity has nothing to do with life on earth. We have lived as if Christianity were contained to the upper world, having nothing at all to do with the lower world. We have mistaken Hebrews, which says faith is the “conviction of things unseen,” to say that faith is the conviction of things unknown—as if our faith were imaginary. In other words, we have given into a radical, unbridgeable divide between the sacred and the secular. Rather than mere Christians, we have become mere pragmatists… except on Sundays, and at our Bible studies.

Black Lives Matter is a pragmatic movement. Mr. Trump is a pragmatic president. Evangelicals are the lead pragmatists of them all. We have lived in the lower world without God. He has had nothing to do with our vocation, entertainment, politics, sex, art, economics, civil law, customs, and cultural traditions. God is God of our quiet times, but there His jurisdiction stops. We enjoy freedom of worship within the four walls of our church, but have no concept of the full exercise of religion at all times and in all places. We support an educational institution that has told us plainly that God is not welcome. The Christian faith has been relegated to the upper world for a very long time now, leaving secular humanism to rule in the lower world. That lower philosophy is devouring that upper faith (which we should have never lodged up there in the first place).

Ironically, we are watching the erosion of that Christian faith while politicians, rioters, and evangelical leaders claim they are protecting and promoting that Christian faith. They can get away with this because we’ve permitted the notion that Christianity is not real, but a dream. If a dream, then Jesus can become whatever you want him to be. There is merely an outline of him in the American psyche, and people fill that outline with whatever they want like Fouquet filled Mary’s form with the king’s mistress, Agnes Sorel.

We must avoid, then, the mindset which says, “lay down your ideology, presuppositions, and just give people Jesus.” Those who recommend this are either trying to smuggle an unbiblical ideology into the Christian church, or being duped into letting others do so. Those who recommend this will end up offering the form of Jesus without the substance. Schaffer once said,

I have come to the point where, when I hear the word ‘Jesus’—which means so much to me because of the Person of the historic Jesus and his work‚ I listen carefully because I have with sorrow become more afraid of the word ‘Jesus’ than almost any other word in the modern world. The word is used as a contentless banner, and our generation is invited to follow it… we must fight this contentless banner, with its deep motivations… which is being used for the purpose of sociological form and control (Escape from Reason, 101).

The first thing to do is acknowledge that much of what presently purports to be Christianity is merely Fouquet’s Virgin and Child—an empty shell. It is Jesus without the Christian faith. It is a naked adulteress posing as the mother of God. It is high time we come to grips with the vanity of such Christianity less we end up caught in it like Samson who “did not know that the Lord had left him” (Judges 16:20).

The next thing we must do is deal with the God who is here. He is the Word made flesh. He speaks. He is handing America over to her sins. He is King up there and down here. He is a Savior-King who willingly laid down His life for those who cast off His law and did what was right in their own eyes. In short, we must fear God. To know Him savingly is to know Him soul and body. To know Him truly is to know Him in heaven and on earth. To come to Him, you must come away from everything else. You cannot fit a Christless ideology into Christ. You cannot fit Christless living into the Christian life. You cannot sanitize evil notions of justice, power, authority, reconciliation, mercy, and love, and make them Christian. You must come wholly away from all of that to the whole Christ.