Pastor James Coates, Liberty of Conscience, and Jesus as King over Albertan Magistrates 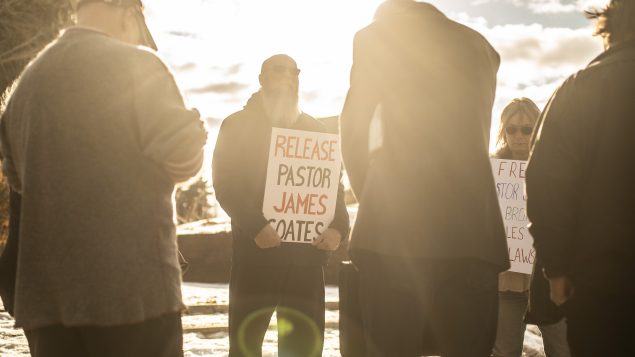 The Albertan civil magistrate required Grace Life Church to close its doors. Pastor James Coates and the church continued to assemble as Christ directs. He now sits in jail. His wife, Erin Coates, cares for their children without him. The church continues to meet and praise the Lord they do. Thankfully, many Christians are praying and have encouraged the Coates and Grace Life Church. At the same time, some have expressed confusion and disagreement over what has occurred. We can learn many lessons from the situation in Alberta. One of those lessons, a critical one, is the lesson of Liberty of Conscience and the truth that civil magistrates must concern themselves with God’s will in their mandates.

The Legislative Body of Alberta, in conjunction with the Queen of England, decreed the Public Health Act (RSA 2000). That Act stated that a “Public Health Emergency” means, among other things, “an occurrence or threat of an illness or a health condition.” You might call that a pretty low bar. The Act goes on to state that in the case of such a “Public Health Emergency,” the Medical Officer of Health “may take whatever other steps are, in the Medical Officer of Health’s opinion, necessary in order to lessen the impact of the public health emergency.”

Deena Hinshaw, the Chief Medical Officer of Health referenced in the Act, then mandated (CMOH Order 42-2020) that faith leaders could conduct worship services at a place of worship if the number of persons assembled did not exceed 15% capacity. She also said that they could do drive-in worship if all attendees remained in an enclosed vehicle. She grounded her order in the Public Health Act,

Whereas under section 29(2.1) of the Public Health Act (the Act), I have the authority by order to prohibit a person from attending a location for any period and subject to any conditions that I consider appropriate, where I have determined that the person engaging in that activity could transmit an infectious agent. I also have the authority to take whatever other steps that are, in my opinion, necessary in order to lessen the impact of the public health emergency.

Grace Life continued to assemble. Police and other civil authorities came to the worship gatherings of the church and inspected.

WHEREAS the Chief Medical Officer of Health (“CMOH”) has issued the following Records Of Decision – CMOH Order 42-2020, 26-2020 of the Public Health Act, as may be amended or varied by subsequent Records of Decision, in response to a public health emergency; …

NOW THEREFORE, I hereby ORDER and DIRECT: That the owner IMMEDIATELY CLOSE the above noted premises to public access, including congregants, members or attendees.

The church continued to assemble. Pastor James is now in prison. Civil authority has said he is free to go under the condition that he agrees not to assemble his church as he had been doing, contrary to the CMHO order. He has not agreed and remains in jail.

There are many more details, but the above gives you the legal flow of what has occurred. (Note, I do not claim Pastor James agrees with the principles I lay out here, or that such ideas are operating in his thinking—maybe, maybe not).

The problem revolves around the conflict between what Deena Hinshaw (Coates’ civil authority) has commanded he do and what Jesus Christ (Coates’—and Hinshaw’s—ultimate authority) has commanded he do. Jesus Christ commands the worship of God according to divine prescription. Such worship involves assembling a church on the Lord’s Day and includes things like Baptism and the Lord’s Supper. Hinshaw’s order prohibits such worship (i.e., you cannot serve the Lord’s Supper to people in sealed vehicles, and you cannot assemble the church at 15% capacity). Coates and Grace Life must then choose: Obey God or obey Deena Hinshaw. We have a genuine issue of Liberty of Conscience here.

When modern man hears Liberty of Conscience, he can think it means that you are free to do whatever your conscience tells you (and don’t let anybody tell you any different). We hear lines like, “Don’t let anyone dictate your conscience”—”Individuals are free to worship God according to their own conscience.” Such statements have merit and are good as far as they go. But they do not correct modern man’s misconception of the doctrine—”Let your conscience be your guide.” Coates’ case is not merely about his conscience versus Hinshaw’s.

You cannot talk about Liberty of Conscience without talking about God’s law. You cannot discuss what is within man without discussing what is above him, in the heavens—God and His Word. The 1689 Baptist Confession states:

The Westminster Confession of Faith signals that Liberty of Conscience particularly relates to institutional authority, be it ecclesiastical or civil:

And because the powers which God hath ordained, and the liberty which Christ hath purchased, are not intended by God to destroy, but mutually to uphold and preserve one another; they who, upon pretence of Christian liberty, shall oppose any lawful power, or the lawful exercise of it, whether it be civil or ecclesiastical, resist the ordinance of God (20.4).

If civil authority had said that Pastor James could go under the condition of a “lawful” order—like do not murder or steal—then regardless of what Pastor James’ conscience said on the matter, the magistrate would not be transgressing Liberty of Conscience. In that case, Coates would be resisting “the ordinance of God.” The civil authority would not be commanding James to do anything contrary to or not contained in God’s Word. But the civil authority, as noted above, has set itself at odds with the King whose servant they are, the King who put them in office.

This truth does not, of course, mean that a magistrate needs chapter and verse for every law. But it does mean that Congressman Greg Steube was precisely right to invoke Scripture and reason from it in his recent address to Congress. And Congressman Jerry Nadler was foolish to claim God’s will is no concern for Congress. Pastor James Coates is right for his conscience to be bound to the Word of God. He is free from the orders/conditions of the civil magistrate in Alberta that are contrary to God’s Word. As magistrates command that which is contrary to or not contained in God’s Word, they operate as tyrants.

When civil magistrates do not rule in the fear of God, then injustice and suffering for citizens are inevitable.

From such a position, you cannot determine whether Hinshaw’s mandate, now keeping Coates in prison, is just or unjust. Someone might object here, saying, “Hinshaw need not reference Christ’s Word or God’s will to determine if a legally binding health order is reasonable or not. She has human reason and can simply use judgment or her ‘opinion’ in the matter.” But that is the very thinking that has gotten us into this mess. We all need to be asking, “Hinshaw’s mandate is just according to what? According to Hinshaw’s reason? No. As Jonathan Edwards said, reason is the judge but not the standard by which we judge. Reason is lost without revelation. It is a judge without a standard.

The situation in Alberta reminds us all that we must choose between two options: Either James Coates resists lawful power/authority, wrongly claiming Liberty of Conscience, and thus resists “the ordinance of God;” or, the Albertan magistrate is guilty of tyranny for conditioning Coates release from prison on a command that is unlawful according to King Jesus whose servant they are. There is no third option. And the fact that there are only two options has much to teach us about our modern problem, Liberty of Conscience, and the relationship of Christ and His will to the state.

Pray for Pastor James and his family. Pray for Grace Life Church. They are reminding many that “the Most High rules the kingdom of men” (Daniel 4:17).