Resolution 9 and the Southern Baptist Convention 2019 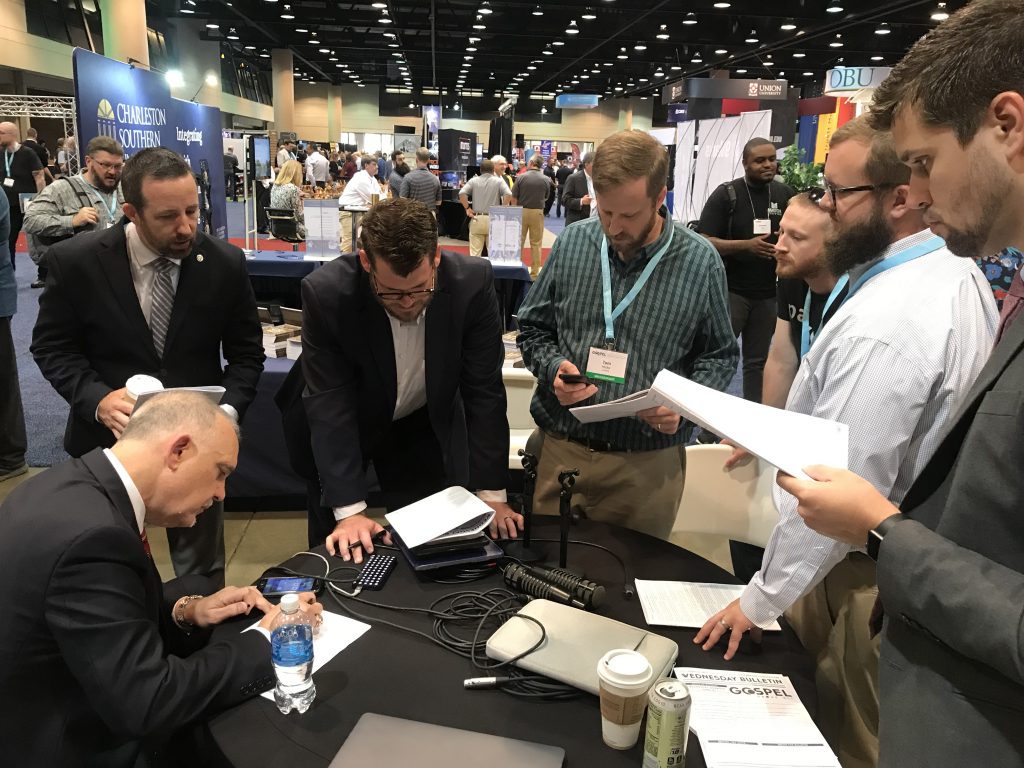 Several good things took place during the 2019 Southern Baptist Convention that met in Birmingham. There was a strengthening of the membership guidelines to address issues of racial discrimination and sexual abuse in churches, with a great deal of attention given in a variety of forums to the latter concern. The IMB recognized and commissioned more workers as reports from various fields were shared with the 8000 gathered messengers.

Each of the heads of our various agencies and institutions (with the exception of LifeWay, which is still in the search process for a replacement for Thom Rainer) gave reports. As an expression of their accountability to Southern Baptist churches each entity head always takes time to field questions from messengers during the annual convention. “Field” here is the operative word. The intent is that the questions actually be answered, but as we were shown once again this year, that doesn’t always happen.

Perhaps the most talked-about action of #SBC19 took place during the report by the Committee on Resolutions. Each year this ad hoc committee is appointed by the President to receive, possibly write, and recommend resolutions to the convention for adoption. Thirteen such resolutions made it out of committee this year, including excellent ones addressing “The Evil of Sexual Abuse” (#2), “Sexuality and Personal Identity” (#5), and opposing women being drafted into military service (#10). None of those helpful resolutions, however, garnered as much attention as Resolution 9.

This infamous resolution, “On Critical Race Theory and Intersectionality,” was ill-advised from the start. I first read the resolution when Al Mohler texted me about the prospect of amending it on Wednesday morning (shortly after it was published). My hot take was that the resolution was a disaster in that it would create a firestorm in its original form (it didn’t take Nostradamus to see that coming). Within a few minutes of reading the resolution a group of thoughtful friends assembled to work on amendments. More about that in a minute.

First, a brief lesson in how resolutions are handled at a Southern Baptist Convention might be helpful. Bylaw 20 of the SBC instructs the President to “appoint a Committee on Resolutions to consist of ten (10) members, any two (2) of whom shall have served as Committee on Resolutions members during the prior year, and any three (3) of whom shall be members of the Executive Committee.” Resolutions may be submitted no later than 15 days before the annual convention meeting. Bylaw 20 states that “a list of the titles of all properly submitted proposed resolutions shall be printed in the Convention Bulletin. The list shall include the name and city of each person properly submitting a resolution, and the disposition of each proper submission.”

Page 16 of the Tuesday Bulletin of the 2019 SBC states that “the SBC Committee on Resolutions is vested with the authority to [1] combine, [2] title or retitle, [3] reword submitted resolutions, and [4] submit resolutions of its own making.” I inserted the bracketed numbers for clarity on the options that the committee is authorized to exercise. Keep this in mind because it becomes important later when we assess what the committee did to Resolution 9.

After working feverishly for about 45 minutes to make amendments (I was under time-constraints because I was committed to attend the Southwestern Seminary Alumni Luncheon) my friends and I came up with a significantly, precisely revised resolution. It’s impossible to make a race horse out of a camel but I liked our revisions and would be willing to ride the resulting resolution even today. The problem was that we had a total of 17 additions and subtractions to the original (stay with me) one presented by the committee. There is no way that many amendments of that precision could be understood, much less, approved, by the messengers. I had difficulty following them and I helped write them and had them all typed out in a pdf.

After consulting further with Al Mohler, I decided to restrict my proposed amendments to the addition of one “whereas” and two “resolveds.” The following is what I took to microphone 4 and read for the messengers.

INSERT AFTER 1st Whereas—>

Whereas, Critical race theory and intersectionality are godless ideologies that are indebted to radical feminism and postmodernism, and neo-Marxism; and

RESOLVED that we remind Southern Baptists that Critical Race Theory and Intersectionality emerged from a secular, worldview and are rooted in ideologies that are incompatible with Christianity; and be it further

RESOLVED, That we repudiate all forms of identity politics and any ideology that establishes human identity in anything other than divine creation in the image of God and, for all redeemed humanity, our common identity, together eternally united to Christ; and be it further

I asked that my proposal be considered a “friendly amendment” by the committee. The chairman, Curtis Woods, however, called it “unfriendly.” I argued that the amendment would strengthen the resolution by acknowledging the roots of these ideologies and making it more explicitly theological. After hearing from a few more messengers, both pro and con, the amendment failed in a split vote, then the original resolution was overwhelmingly adopted.

There was more intrigue that surrounded the lead up to and actual voting on that resolution, but I will leave that for others with more insights to assess (you can watch the proceedings here).

The 16 originally submitted resolutions are identified on pages 22-23 of the Wednesday Bulletin of the 2019 SBC. Ten of those were listed as declined with brief explanations of why the committee turned them down. Six were listed with simply the title, author(s), city and state of the author(s), and a “See Resolution #__,” referring to the number of the recommended resolution whose full text was printed in the bulletin. These are the six resolutions of the 16 submitted that made it out of committee presumably having been titled or retitled, or reworded, including one by “Stephen M. Feinstein, Victorville, CA” entitled, “On Critical Race Theory and Intersectionality.”

An example of such refinement by the committee is seen in the resolution submitted by bio-ethicist, C. Ben Mitchell, of Union University. I have compared what he submitted to the committee to what was printed on page 20 of the Wednesday Bulletin. He originally titled it, “Resolution on Human Germline Editing.”.” The committee retitled it, “On opposing Human Germline Editing.” There are two or three other similarly minor edits that the committee did to Ben’s submission. There is no doubt, however, that the resolution that was presented to and adopted by the messengers was indeed Ben Mitchell’s resolution.

I did not take the time to track down the other five submissions that were accepted and passed along by the committee to the convention. But I highly doubt that what was done to Pastor Feinstein’s original resolution was done to the other four. The committee did not merely reword it. They rewrote it to say something altogether different than what he submitted.

The original resolution clearly denounced Intersectionality and Critical Race Theory as they are typically understood, thus warning Christians against them. The revised version said that critical theory and intersectionality are mere tools that could be used in ways subordinate to Scripture.

You can compare and contrast the original to the committee’s version (both listed by the same title in the Wednesday Bulletin) by clicking the links above. But here is a quick example of what Pastor Feinstein submitted in his original resolution:

WHEREAS, critical race theory and intersectionality are founded upon unbiblical presuppositions descended from Marxist theories and categories, and therefore are inherently opposed to the Scriptures as the true center of Christian union; and

WHEREAS, both critical race theory and intersectionality as ideologies have infiltrated some Southern Baptist churches and institutions—institutions funded by the Cooperative Program; and

WHEREAS, critical race theory divides humanity into groups of oppressors and oppressed, and is used to encourage biblical, transcendental truth claims to be considered suspect when communicated from groups labeled as oppressors; and

Now I (and Pastor Feinstein himself) observe certain overstatements that need different degrees of amendment in what he originally submitted. That could have been accomplished, however, while maintaining the integrity of Feinstein’s original meaning. As an editor, I am well aware of this process and have seen a few occasions of articles that needed to be rewritten or remain unpublished.

What the Resolutions Committee did was rewrite Feinstein’s resolution, giving it an almost opposite meaning from that which he intended, and did so while telling the messengers of the convention that his original resolution was not “declined,” leaving the impression that it was merely reworded as it passed through their hands. They should have openly declined his and written their own—which is in essence what they actually did.

It is our aspiration in this resolution simply to say that Critical Race Theory and Intersectionality are simply analytical tools. They are meant to be used as tools, not as a worldview.

Well, that aspiration was successfully realized. That is precisely what the adopted resolution says. But the reality is that neither Critical Race Theory nor Intersectionality are simply tools. They are indeed ideologies that have arisen out of neo-Marxist, postmodern worldviews and are used by many to promote those worldviews today (the fact that it is called Critical Race Theory indicates that it is not simply a tool of analysis). Do they contain insights that are true and helpful? Yes, I concede that. But to suggest that they are merely tools of analysis is misleading at best and deceptive at worst.

I am confident that the Resolutions Committee did not intend to deceive Southern Baptists. But I fear that the way that they handled this resolution will result in many being misled.