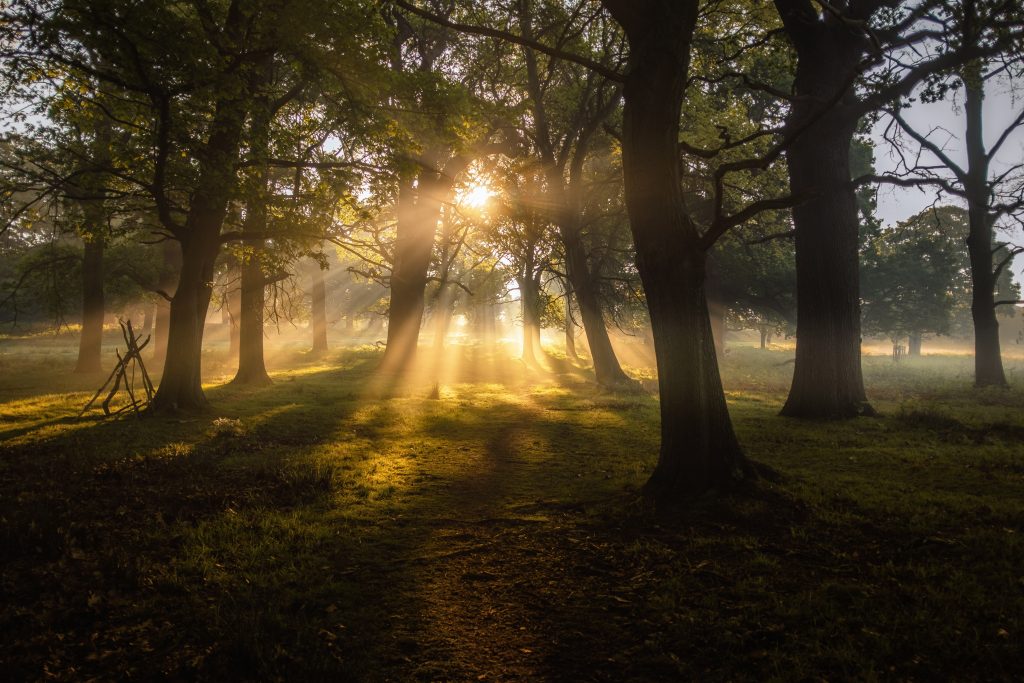 The utterly safe place, with the most engagingly good people, uniting together in the most joyful, holy, and pure expressions of worship is by experience and theological principle Utopia in the present age—it doesn’t exist. There are no perfect people, no perfect places, no perfect systems, and no perfect churches. The world is fallen; it is not what it should be, and that includes us.

Until God, according to his eternal plan, brings us to heaven, he has placed within this world of sin influences that allow us to play baseball and go grocery shopping without seeing every event become a blood bath. We still have arguments with umpires and grit our teeth when the check-out guy is slow, but a sense of decency and balance preserves order and even congeniality. We find many people around us that have cultured our common sense to a high degree of helpfulness and a few that have honed special intellectual and technical skills to make life more bearable for everyone. So it is also with artists, writers, and musicians. The special grace God gives Christians also serves as common grace to the world. The Bible, that God Himself has taught them to love, has made them salt and light and given them personal values that influence conversations and community ideals. God has a purpose still to accomplish in this fallen world and he uses both common grace and special grace to track us down and draw us to him.

The church has a calling to distribute as much truth in this world as God has revealed and to display as much grace as God grants it. This makes the church mature inside and bear witness outside. Though there is much decline, much to lament, and we know we have done better and could do better yet, from the standpoint of our own stewardship, we are encouraged when we observe God’s use of these instituted means to hunt us down. We know that he does this through the loving instruction and encouragement in faithful local churches.  But also, though our world is a mess, we can sometimes discern the odd and momentary places where the grace of God lurks and inserts a needle point into one’s experience, providing a path for a settled conviction. I received many surprising graces in the relatively insignificant context of a small Mississippi town in the 1950’s and ‘60’s.

Charles Martin had an old clunker of a bicycle, hard to handle and no potential speed (at least not in the bicycle), and I had a newer and more manageable one that took me all over the town of Brandon, Mississippi. Charles and I were up to a race with each other. The route was around the oval, gravel driveway in front of my house and then onto the single road, gravel again, that led from our house (and ours only), to the top of a hill where a steep concrete single-lane entry to the gravel road emerged from Highway 80 just below. As we rounded the driveway and began our run up the hill, I was fully confident of victory. Then, I saw the clenched jaws of Charles Martin and quickly felt his gravel and ate his dust. He met me where the concrete entrance met the gravel. I was sheepish, and amazed, and found a place to develop a conviction that sometimes sheer dogged determinism and a refusal to quit can overcome the natural advantage that an opponent may have in keeping you from reaching a goal to which you have put your heart. Charles Martin now is in the medical profession and has a ministry to needy children in Africa. If I had not seen him win the race, I am not sure I would have finished Baptists and the Bible (1 Corinthians 9:24, 25).

Charlotte Graves as a high school young lady played organ at the First Baptist Church. When our softball team would meet on Saturday afternoon at the church parking lot to leave for our weekly game, she would be in the auditorium practicing. She had friends and other things she could have found to do (even in Brandon) but she did not want to embarrass herself or create an unpleasant, grievously-tolerated, annoyance when the time for the offertory came. It was to add to, not detract from, the sense of beauty, wonder, symmetry, and rest that was all to be a part of the worship on Sunday morning. Charlotte, though she resides in Tennessee, now regularly keeps our whole Class of ’64, as well as members of several other classes, informed of events in Brandon and especially of prayer requests for this first semi-decade of baby-boomers heading into retirement, to hospitals, to losses in families, and to eternity. When I was in high school, I could not envision a time when such a large percentage of classmates would give long-term evidence that, for them too, grace lurked in many rescuing places. Charlotte continues to look to little opportunities to establish paths to the true enjoyment of God. I thought about her frequent days there at the church, and grace established a path for the conviction that made me want to stir up the gift that was in me and that it was not wrong, but beneficial to all, if the saints could actually see my progress in the things to which I was called. I am not sure if I would have spent late nights in finalizing lectures, sermons, and chapters if I had not seen Charlotte Graves practicing (1 Timothy 4:15, 16).

Recently, she sent our entire high school class a Youtube video (she sent it by e-mail; I don’t do Youtube) of the 90th birthday celebration of Esther Mitchell Fabbricante. Esther and her husband, Dr. Charles Mitchell, moved to Brandon in 1958, which made them feel like newcomers for decades. But, he a physician and she an active person in social, civic, and church matters in Brandon, sang their parts (sometimes literally) in town matters. In addition, their children—eventually five of them—fit into a broad swath of Brandon town life. Her daughter, Charla, married one of my ’64 class mates and has shown amazing resilience and energy in helping him deal with some physical challenges and also has teamed with Charlotte in making sure that former Brandonians have a constant flow in information that we might know the spiritual, as well as physical, needs of our former every-day life-travelers. Mrs. Mitchell, as a bigger than life part of the “it takes a village” mentality of small town Mississippi, bequeathed that gift to her. Among other things she did was the sponsoring in her home a group of young people where we would do a kind of love-of-country, love-of-God study in which it was clear that she took the Bible seriously. She created a path for the download of strong convictions that the Bible was important to the life of the normal, active Christian to establish order in their lives, make them kind, and instill them with a sense of purpose. She is one of the reasons that I work every week to make sure the Sunday School outline is ready for use by Sunday School teachers who love to see Bible-light spring up in their students’ eyes.

Wayne Herring, my Presbyterian friend with whom I shared the classroom from kindergarten through twelfth grade, first uttered the word “predestination” to my incredulous ears at a Valentine banquet at First Baptist Church, Brandon. Not only did this eventually lead to many fruitful and transforming contemplations and discussions, but showed his persevering reception of comfort from that truth in the recent loss of his wife Joyce after her long bout with cancer. Mrs. Crain, my sixth grade teacher, not only taught me everything a sixth-grader should know, but also basketball and how, in her opinion, the Baptist claim not to be Protestant was ridiculous. I had no idea what that meant, but I have spent a good bit of my life looking into the question. She certainly was Protestant and had some very clearly and determinedly held confidence in her Methodist beliefs, and the reason that Methodist beliefs were better that Baptist beliefs. I learned that you can respect other Christians even though you could not be in the same church with them. Serendipitous connections in my own soul between baseball and music gave me a transcendent respect for Willie Mays and Leontyne Price, raceless symbols of excellence that challenged cultural caricatures. Miss Catherine Ward, who would punish malefactors by putting them behind the door while she leaned on it, was a marvelous provocation to all sorts of learning. Along with two Mrs. Bentons, she taught me more about composition, syntax, vocabulary, stage production, learning a foreign language, and public speaking than any other person ever. Miss Ward was a devoted Episcopalian, a heavy-laden old maid, who loved her church in Jackson and often quoted the Bible in class to quell uprisings and rebuke laziness. It was something of a mystery to me then concerning the pretty frank disagreements she had with my pastor over issues unknown to me, and my pastor did not allow his conviction on what ever issues they had go unexpressed. His son, under Mrs. Ward’s fascinating influence, pursued and obtained a PhD in English and served well as a university professor in that capacity. I learned, with some degree of perplexity, that someone could have a personal issue with my pastor (who never disappointed me or disillusioned me in any sense to his dying day) and still have a useful and invigoratingly beneficial influence. When our class of eight in solid geometry groused about having to memorize complex theorems and what was the use, teacher Charley Jones said, “Well, among other things, to keep from being stupid.” Just recently his granddaughter won some tens of thousands of dollars on Jeopardy. From that class, Charley’s sons Bruce and Don became respectively a medical doctor and a Westpoint appointee, my first cousin took seriously “among other things” and went on to be the head of engineering departments in two major SEC Universities; and, on more than one occasion, in issues of vital stewardship, I have felt the burden of seeking to avoid stupidity (Ephesians 4:29-31).

In a hundred ways, middle-Mississippi-town from 1946-1968 could have, should have, and (with true moral oughtness) ought to have been better. We allowed the culture—i.e. love of the world—to press us into both ethical and doctrinal compromises. But God is dealing every day with a fallen world and causes his grace to lurk in strange places. Although there is a reservoir called Lake Utopia, in Jasper County, Mississippi, the weather can still be dangerous during a thunderstorm if you are on the lake. This was Brandon; not Utopia. I am glad I fell into some of those cracks in the fabric of this world where God presses his grace into our otherwise dismal and destructive lives.