Some Baptist Thoughts on Trinitarian Relations 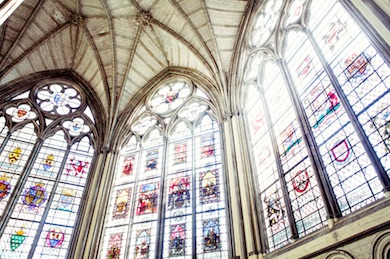 The online evangelical world has been abuzz of late with trinitarian discussion. I won’t review all the literature (e.g., see here for a synopsis of the debate), but I would like to highlight a few things that Particular Baptists have written on the subject in the past. More specifically, I’d like to continue the discussion around eternal generation (and not eternal submission) as the means of differentiating the divine persons (see this excellent post by Matthew Emerson on eternal generation). Or, more simply, if a single divine nature is shared among the three persons of the trinity, what differentiates the Father from the Son, or the Son from the Spirit? Particular Baptists have agreed with the classical understanding that it is the personal relations that serve as the only means of distinction between the divine persons.

“In this divine and infinite Being there is the Father, the Word, and the Holy Spirit; each having the whole divine Essence, yet the Essence undivided; all infinite without any beginning, therefore but one God; who is not to be divided in nature, and being, but distinguished by several peculiar relative properties” (2; emphasis added).

It is the personal relations, or distinctive relative properties, which belong to each Person, which distinguish them one from another; as paternity in the first Person, filiation in the second, and spiration in the third; or, more plainly, it is “begetting”, (Ps. 2:7) which peculiarly belongs to the first, and is never ascribed to the second and third; which distinguishes him from them both; and gives him, with great propriety, the name of Father; and it is being “begotten”, that is the personal relation, or relative property of the second Person; hence called, “the only begotten of the Father”, (John 1:14) which distinguishes him from the first and third, and gives him the name of the Son; and the relative property, or personal relation of the third Person is, that he is breathed by the first and second Persons; hence called, the breath of the Almighty, the breath of the mouth of Jehovah the Father, and the breath of the mouth of Christ the Lord, and which is never said of the other two persons; and so distinguishes him from them, and very pertinently gives him the name of the Spirit, or breath (Job 33:4; Ps. 33:6; 2 Thess. 2:8).

Gill also wrote, in a letter to John Davis, a pastor in Pennsylvania:

“Jesus Christ is the Son of God by nature and not office, … he is the eternal Son of God by ineffable filiation and not by constitution or as mediator in which respect he is a servant, and not a Son. And of this mind are all our churches of the particular Baptist persuasion nor will they admit to communion, nor continue in communion [with] such as are of a different judgment. … I have some years ago published a treatise upon the doctrine of the Trinity, in which I have particularly handled the point of Christ’s sonship, have established the orthodox sense of it, and refuted the other notion, which tho’ it may be held by some, as not downright Sabeleanism [sic], yet it tends to it.”

“Three divine Persons constitute the Godhead-the Father, the Son (or the Word), and the Holy Spirit.  They are one in substance, in power, and in eternity.  Each is fully God, and yet the Godhead is one and indivisible.  The Father owes His being to none.  He is Father to the Son who is eternally begotten of Him.  The Holy Spirit proceeds from the Father and the Son. These Persons, one infinite and eternal God not to be divided in being, are distinguished in Scripture by their personal nature or in relations within the Godhead, and by the variety of works which they undertake.  Their tri-unity (that is, the doctrine of the Trinity) is the essential basis of all our fellowship with God, and of the comfort we derive from our dependence upon Him” (2.3).

Andrew Fuller battled agains the Socinians of his day. He was an ardent defender of the Eternal Generation of the Son as well.

Here is one instance:

“The incarnation, resurrection, and exaltation, of Christ declared, but did not constitute him the Son of God; nor did any of his offices to all which his Sonship was antecedent. God sent his son into the world. This implies that he was the

Son antecedently to his being sent, as much as Christ’s sending his disciples implies that they were his disciples before he sent them… I have heard it asserted that ‘Eternal generation is eternal nonsense.’ But whence does this appear? Does it follow, that because a Son among men is inferior and posterior to his father, that it must be so with the Son of God?…Of the only-

begotten Son it is not said he was, or will be, but he is in the bosom of the Father; denoting the eternity and immutability of his character. There was never a point in duration in which God was without his Son.” (see also here and here on Fuller’s trinitarianism).

These are just a few examples of Particular Baptists that affirmed the differentiation of the godhead based on personal relations of  origin. Eternal generation is an important part of classical trinitarianism and needs to be clearly articulated and defended, lest we see another rise of trinitarian heresies that don’t seem content to remain in the past.