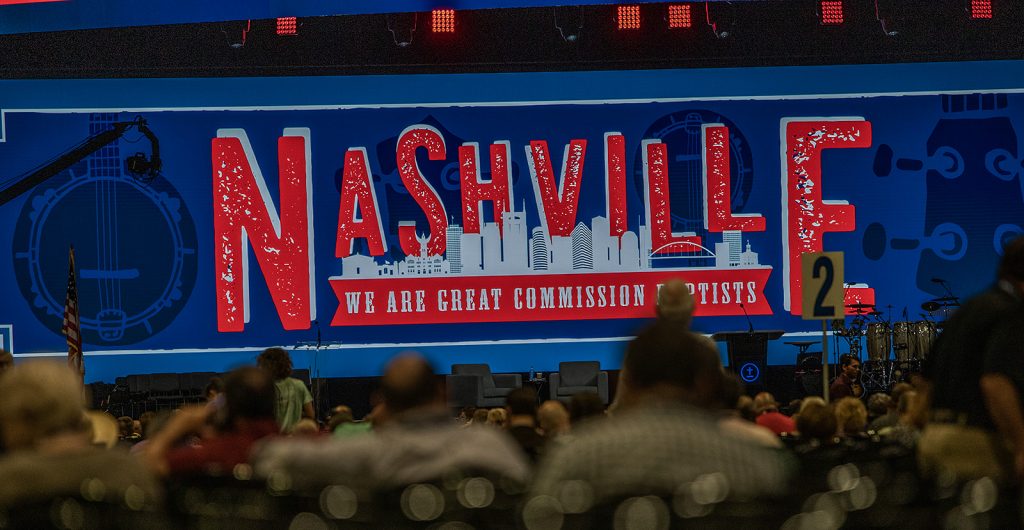 Several things happened at #SBC21 and many, if not most, of them are deeply concerning to grassroots Southern Baptists who love Christ, fear God, tremble at His Word, and want to cooperate for the cause of missions and evangelism with others who are likeminded.

The Founders pre-conference was outstanding under the theme, “Be It Resolved.” Those messages will be posted online in the weeks ahead and I commend them to everyone, whether SBC or not. Though I was unable to attend I heard that the Conservative Baptist Network breakfast on Tuesday morning was also an outstanding event (and, like the Founders pre-conference, sold out). Those who gathered in these two events were people who are concerned about the progressive direction of many in the SBC.

The reports from the International Missions Board about gospel-advance around the world are always encouraging to hear and to be reminded of what is, or at least can be, best about our Southern Baptist Convention. We do have a great mechanism for getting workers into hard places for the sake of Christ.

More could be said about the good things that took place in Nashville, such as evangelistic efforts, fellowship and renewal of friendships, encouraging conversations, discipleship efforts, and the passing of the strongest resolution in SBC history against the holocaust of abortion—which was done by successfully challenging the Resolutions’ Committee efforts to prevent the convention from ever seeing it. It also overcame a media campaign by one of that committee’s members (Bart Barber) against it, compounded by Southern Seminary professors’ (Denny Burke and Andrew Walker) public opposition to it, along with an impassioned speech on the floor of the convention against it by a paid employee of our Ethics and Religious Liberty Commission, Josh Wester. The fact that a widely split convention (the presidential race was won by a 52% to 48% vote) could overcome almost insurmountable odds to get this resolution passed was a clear reminder that denominational elites do not always have to get their way if grassroots church members will unite to wisely engage the process to challenge their agenda at those points that are problematic.

Ed Litton, a pastor in Alabama, was elected President of the SBC. At the time of his election his church believed that

God is the Creator and Ruler of the universe. He has eternally existed in three persons: the Father, the Son, and the Holy Spirit. These three are co-equal parts of one God.

Shortly after his election (and after this statement from his church’s website was publicized), the church changed their beliefs to exclude that last sentence about God, which is a good thing because it eliminates an ancient heresy that teaches that God has parts and is not one, divine, simple, Being. This rapid step toward orthodoxy should be celebrated despite the questions it raises about the church’s polity.

Before the convention Ed said, “I think that our pulpits should be places that reflect our view of pastors. At Redemption church, we do not have women preach.” Also, before the convention Ed’s wife, Kathy, said thiswhile on stage with her husband during a Sunday morning, “In this series that we’ve been doing for five weeks… this is our last sermon…”

Many Southern Baptists find this problematic. Evidently, the majority of those voting for a new president did not. Though the celebration of the elitists and more woke-minded Southern Baptists was exuberant, and the disappointment of the grassroots Southern Baptists was palpable, everyone should stop and remember that Ed Litton won that race by 556 votes. Despite all of the attempts by the platform personalities to assure us that we are united and “together on mission,” there is no denying that the division within the SBC right now is real.

The Southern Baptist Convention is in a mess. We are facing a pivotal moment. By “moment” I do not mean, month” or “year.” I mean five years. From conversations that I and others had my sense is that we had more first-time messengers at this convention than we have had in years. I am sorry that the post-convention survey did not ask that question. But it is undeniable that many, and I would guess thousands, of new people showed up to vote for a new president. The Washington Post has reported that the North American Mission Board financially invested in getting voters for Ed Litton to Nashville:

One insider said NAMB has been pouring money into getting urban church leaders to the annual meeting to get enough votes to secure the presidency for Ed Litton, an Alabama pastor who has promoted work on racial reconciliation. Litton’s wife, Kathy, heads NAMB’s ministry for wives. A NAMB spokesman said it will send 150 church planters to the meeting this year.

So, I guess congratulations are in order for Kevin Ezell and his NAMB crew for successfully securing their objective. But surely Kevin won’t be surprised that grassroots Southern Baptists will be upset to learn that their money that they have contributed through the Cooperative Program has been poured into getting Ed Litton elected. They probably will become even more upset when they learn that Southeastern Seminary President, Danny Akin, used his platform to “Urge [his] brothers and sisters to get behind @EdLitton!!!! He would serve us best!” Once again, our Cooperative Program dollars hard at work. Whenever CP giving decreases over the next year, SBC executives ought to stop and consider that lots of people do not like paying for our denominational servants to use the money we give them to undermine the very things we stand for. If you are going to rob my house, don’t expect me to pay for your get-away car.

With all of the CP money used to get Pastor Litton elected, and all of the scandalous smear campaigns carried out against Pastor Mike Stone to keep him from getting elected, the presidential vote was still decided by only 556 ballots. I spoke to people who voted for Al Mohler on the first ballot and did not vote on the second because the unfounded accusations by Russell Moore and Phillip Bethancourt (be sure and actually listen to the edited audio clips & don’t simply take Bethancourt’s comments to tell you what you are supposed to be hearing) made them concerned that Mike could be involved in some kind of coverup. So the negative campaign tactics worked. And yet, the vote was decided by only 556 ballots.

What does all of this suggest? Among other things it makes clear that shrewd political operatives have successfully elected their candidate to lead the SBC for the next year. They have done so by using money that rank-and-file Southern Baptist churches gave to support missions and by a smear campaign against a faithful Southern Baptist pastor who is more like they are than any of the SBC elites who want to maintain their death-grip on the levers of power in the convention.

For this to change, more of the 47,000 churches are going to need to become involved in the annual meeting. It is time to send a message to the elites. They can make fun of us, scold us, suggest we don’t care about evangelism, and call us “jerks”—all of which, by the way, was done from the platform this year—but such tactics will not work anymore.

It is time for Southern Baptist churches, led by God-fearing pastors, to show up, stand up, and speak up, and remind the elites and our erstwhile leaders that the seminaries, institutions, and agencies of the SBC belong to the churches. Those who lead them and work in them work for the churches. The trustees of them are not their unpaid employees but represent the churches. And it is past time that the churches start holding our employees and trustees accountable.

This can happen, and I believe will happen. But it will not happen without decisive steps that will evoke charges of being mean-spirited, unkind, fundamentalist, unchristian, and worse. Trust me, I know. But my encouragement to all who want to see the SBC become healthier is to keep your Bibles open and don’t listen to the naysayers who fear the churches of the SBC rising up to make our voices known. Fear God and do what is right. The battle is the Lord’s, and He will decide the outcome. Let us be found being faithful and pursuing righteousness according to whatever light and power the Lord will give us.