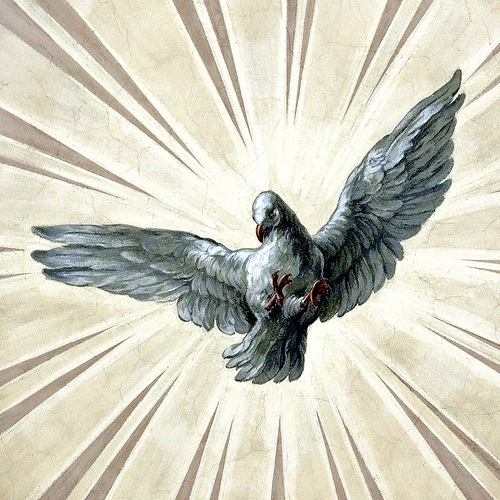 (See also Part 1 and Part 2 of this series on the Holy Spirit.)

This post gives a few more reflections on the nature of the work of the Spirit in the New Covenant. This time the focus is on Jesus’ words about the work of the Spirit from John 14. In verses 16, 17 we read, “And I will ask the Father, and he will give you another Helper, to be with you forever, even the Spirit of truth, whom the world cannot receive, because it neither sees him nor knows him. You know him, for he dwells with you and will be in you.” In light of Jesus’ return to heaven, the Spirit comes in a more powerful way and in a different context.

First, He comes as a comforter, or advocate, now that Jesus has gone to the Father’s side and intercedes for us as our propitiation and advocate. The ransom contemplated by Elihu as the answer to the dilemma of Job has now come and completed the ransom and restored righteousness (Job 33:23-30) and given clarity to the ways of God with men. The Spirit can now impress on the minds of believers that Christ’s blood and righteousness are eternally sufficient for the presence and enjoyment of eternal life. When Jesus’ work reached its fullness in his ascension, the Spirit’s work can also reach its fullness in assurance and granting of gifts for the development of the Church as the body of Christ.

He revealed all those elements that are necessary to understand the mysteries of the gospel. According to verse 26 “He will teach you all things and bring to your remembrance all that I have said to you.” and then in 16:13, Jesus added, “When the Spirit of truth comes, he will guide you into all the truth.” This is a ministry of teaching. The Spirit gave truths to the apostles about Christ that had not been spoken by Christ. Christ had given some indicators of the direction that this more expanded revelation would go, but the details and its application would be a unique ministry communicated through the Apostles and, under their authority, prophets in the local churches (Ephesians 2:19-22; 3:4, 5) The Spirit’s work also involved the gift of remembrance – Many things Jesus did and said were without any significance to the disciples during his earthly ministry. Later they would remember what he had said and find his meaning. This happened as a result of the Spirit’s ministry as promised here by Jesus (cf. John 2:21, 22).

The gift of revelation is not new, for the Old Testament writers wrote in accordance with it (1 Peter 1:10-12). New, however, is the fullness and eventual completeness of revealed truth. The gift of the apostolic ministry for the exposition of the meaning of Jesus as the Christ in his work as Prophet, Priest, and King is peculiarly a new covenant blessing that can only be completed after Christ’s ascension. Under the New Covenant operations of the Spirit, subsequent to the revelation of the glory of God in Christ, the word of the prophets is “made more sure,” given greater clarity by showing both the person and the manner in which the messianic promises of suffering and glory were fulfilled (cf. 1 Peter 1:10-12 w/ 2 Peter 1:15-19). This is one way in which the Spirit has been given in a way that He was not before, that is, peculiarly as the revealer of the meaning of all those events included in this startling proposition, “The Word became flesh and dwelt among us, and we beheld his glory, the glory as of the only begotten of the Father full of grace and truth.”

The world has not received the Spirit in regeneration or indwelling and, thus, cannot receive the Spirit in any of these new covenant functions. We see how Jesus uses sensory language in a spiritual way when he notes that the world “neither sees nor knows him.” Of course, no one has ever seen the Holy Spirit, but those that have his present operations do “see” him in seeing the loveliness of those things that he is sent to do: through him we “see” the kingdom of God, and we “see” the glory of God in the face of Christ, and, as Jesus has just told his disciples, “he that has seen me, has seen the Father.”

Now he would be with believers to form among them a spiritual, believing, forgiven community. He would actually be within the life of the corporate body. Now, according to Ephesians 4:3-6, “There is one body and one Spirit—just as you were called to the one hope that belongs to your call—one Lord, one faith, one baptism, one God and Father of all, who is over all and through all and in all. But grace was given to each one of us according to the measure of Christ’s gift.”

Formerly, the Spirit had operated with individual believers, both by regeneration and indwelling, that lived in external community with those that Paul called “my kinsmen according to the flesh.” He was alongside these believers helping and sustaining them as they walked perseveringly as isolated spiritual beings in the midst of those that had not seen the glory of God’s promises in the coming Messiah.

Now, however, he would be “in you” (plural for you) which means “among you,” that is, now functioning to make the entire body characterized by these spiritual traits. The words of this verse [one reading of 14:17 says “will be in you” and another says “is in you”] are repeated by the apostle Paul in Colossians 1:27: To the saints “God chose to make known how great among the Gentiles are the riches of the glory of this mystery, which is Christ in you, the hope of glory” so that through faithful proclamation and instruction “we may present everyone mature in Christ.” The Spirit “in you” is synonymous with “Christ in you.” This is not specifically the personal indwelling of Christ by the Spirit (although that is assumed among all the members of this new community), but the corporate operation of the Spirit by which all these individual members constitute one unified body (Ephesians 4:15, 16; Colossians 1:28; 3:12-17). The Christ has come to bring into one family both Jew and Gentiles and inhabit the whole of these communities, called churches, that the Spirit brings together and, by the truth and through his distribution of gifts, presents the entire community mature in Christ.

Paul exhorts them to “Let the word of Christ dwell in you richly.” Again the “in you” is informative, for it certainly assumes that each of these believers already has the word of Christ in their hearts; this admonition concerns, however, the power of the word in their corporate life as Paul goes on to say, “teaching and admonishing one another in all wisdom, singing psalms and hymns and spiritual songs, with thankfulness in your hearts to God.” The “in you” means the fruitful operation of the word of God among them as the body in their ministering the truth of that word to one another. Even so the promise of the Lord that the Spirit shall be “in you” does not mean that personal indwelling is a new thing operative only under the new covenant, but is an operation of the Spirit among the New Covenant people that could not have been done in the ethnically and ceremonially united but spiritually diverse national Israel.