The need for discriminating preaching and the danger of its absence

I was struck again today by the simple, devastating indictment that 2 Kings 17:33 makes against generic religion

So they feared the LORD but also served their own gods.
This brief summary describes the mixed multitude of Assyrians who were settled in the fallen nation of Israel. Because of God’s judgment on them and their pagan worship, the king of Assyria sent a priest from Israel to “teach them the law of the god of the land” (v. 27). So that priest settled in Bethel and “taught them how they should fear the LORD” (v. 28).

The indictment of verse 33 sheds light on the kind of teaching that the priest did. He certainly introduced them to the ways of the LORD and no doubt taught them the forms, patterns and language of worship. But the result was that they settled into a comfortable lifestyle of “fearing the LORD” while also serving “their own gods.”

The priest failed to be discriminating in his preaching. No doubt he taught them many true things, but he failed to show them the incompatibility of revealed truth with commonly held errors. He taught them what to accept, but not what to reject. And the result was, as Matthew Henry calls it, a “mongrel religion.” It had the trappings of the true while being at heart false.

The priest’s preaching and teaching lacked discrimination. For preaching to be true and faithful, it must be discriminating. It must not only show what is true but show how that is distinguished from what is false. And it must do this on the key issues of the faith. So discriminating preaching will not only show what true faith is, it will also point out how it differs from various expressions of false faith. It will distinguish true repentance from false repentance; true worship from false worship; true piety from false piety; a true church from a false church; etc.

It is very tempting for a preacher to avoid being discriminating in his sermons. After all, the priest in Bethel probably had an easy and perhaps even an acclaimed ministry teaching all those Assyrians the law of God and how to fear the LORD. Yet, because they did not turn from their false gods, his preaching led them to hell. Discriminating preaching would not allow such pluralistic idolatry go unaddressed. But there would have been a cost involved. People don’t mind adding God to their personal pantheons, but when you start shining the light of the exclusivity of Christ on their idols, people tend to take it personally.

This is why discriminating preaching often gets preachers into trouble (and it probably also explains why there is so little of it being practiced today). It is one thing to teach people w 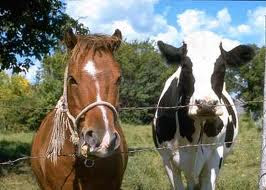 hat a horse is. You can draw it out for them in exquisite detail with eloquent accuracy and garner great appreciation for the care and accuracy with which you teach. But when you next go on to describe a cow and carefully show how, despite their similarities, the cow is not a horse, your teaching becomes discriminating. Then, many of those who came to church riding their cherished (sacred?) cows, thinking them to be horses might become highly offended at you for pointing out the difference. After all, such animals have been ridden for years, maybe for generations. Who are you to suggest that they aren’t really horses!

Discriminating, expositional preaching is a great need in our day. We must be willing to show from the text what God says is right and true and then distinguish that from all of the counterfeits that plague the world and church today. Failure to preach and teach like this leads to a mongrel religion that may fly under the banner of Christianity but has missed Christ altogether. It is a frightening prospect. Where there is no discriminating preaching, it has been and remains a tragic reality.