The Grace of Godliness: An Introduction to Doctrine and Piety in the Canons of Dort by Matthew Barrett 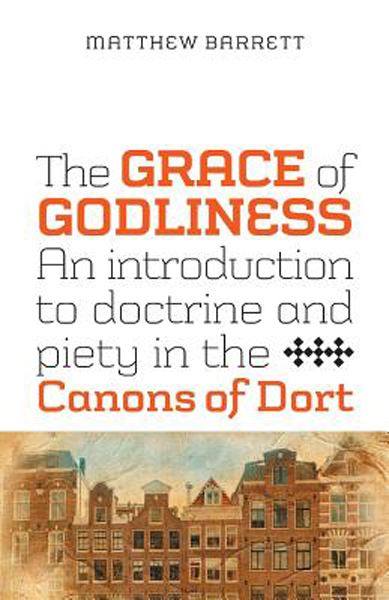 Many people think of “the five points of Calvinism” as cold intellectual doctrines that have little or no bearing on faithful Christian living. In his new book, The Grace of Godliness: An Introduction to Doctrine and Piety in the Canons of Dort, Matthew Barrett shows how far that is from the truth. In this well-written and much-needed volume, Barrett shows that the Canons of Dort demonstrate an intimate connection between Calvinistic doctrine and faithful Christian piety.

I believe this book applies to two errors that seem to be prevalent in today’s recovery of the doctrines of grace. First, some people love to argue for Calvinism, but they fail to appropriate and live in the humble holiness demanded by these great doctrines. As a result, they have a tendency to become proud and spiritually sleepy. Second, some admit that Calvinism is true without explaining how it makes us more like Christ. They exclude Calvinism from the motivations to faithful Christian living and so their piety is impoverished. But both errors are unfaithful to the Word of God. This book shows that “the five points of Calvinism” must be biblically applied for the good of the church and for her witness to the world.

1. Divine Predestination. According to Dort, three practical blessings flow from the doctrine of predestination, including assurance of salvation, humility, and personal holiness.

Assurance of Salvation. Barrett writes, “Assurance of salvation in Christ is the great comfort that comes in affirming the doctrine of unconditional election. Election is to remind the believer that he is safe in the arms of God, for God has chosen him before the foundation of the world” (40-41).

Humility of Mind. Barrett goes on to say, “The child of God, aware and confident of his election, is moved by such assurance on a daily basis to find greater cause to humble himself before God because he recognizes that his election and even the assurance of his election are not due to his own righteousness but due entirely to the sovereign grace and mercy of God” (42).

Personal Holiness.  Assurance of salvation and humble faith are the primary fuel of personal holiness. Barrett says that these are “not a motivator for laxity and carnality but the very source of good works and the ammunition needed to shield the believer from the fiery darts of the devil, which seek to lead the believer’s conscience to despair” (49).

2. Particular Atonement. Christ’s atoning work for His elect people is a cause for personal and corporate worship. Dort 2.9 declares:

“This plan [of particular redemption], arising out of God’s eternal love for his chosen ones, from the beginning of the world to the present time has been powerfully carried out and will also be carried out in the future, the gates of hell seeking vainly to prevail against it. As a result the chosen are gathered into one, all in their own time, and there is always a church of believers founded on Christ’s blood, a church which steadfastly loves, persistently worships, and – here and in all eternity – praises him as her Savior who laid down his life for her on the cross as a bridegroom for his bride.”

Barrett writes, “It is the doctrine of limited atonement that sweetly reminds us that the church, and only the church, is the bride of Christ, for he has paid for her with his blood. It is this doctrine that Dort believes should elicit persistent love and worship of Christ, both here and in eternity” (74).

3. Total Depravity and Effectual Grace. Barrett treats these two heads together, showing their practical implications for humble gratitude, prayers for the salvation of sinners, and pastoral hope.

Humble Gratitude. He writes, “God does not save the elect sinner because of anything in him, but actually in spite of everything in him. Consequently, the only suitable and worthy response from the sinner is humility, praise and thanksgiving toward God” (92).

Prayer for the Salvation of Sinners. In article 15, Dort says, “For others who have not yet been called, we are to pray to God who calls things that do not exist as though they did.” Barrett says, “Here we see the connection between divine sovereignty and evangelism. God alone can call and change a heart of stone to a heart of flesh (Ezekiel 36:25-27). However, the Christian is to pray for these unbelievers and ask God to call them to himself. . . . God instructs us to pray for unbelievers, for our prayers are the very means to this salvific end” (93).

Pastoral Hope. Barrett explains, “Irresistible grace is a reminder that no human method or strategy can save a sinner. It is not the case that the lost simply need more convincing due to indifference. It is not as if one must simply be persuasive enough to get the sinner to react” (94). He goes on to say, “Dort provides hope to the tired and wearied pastor by reminding him that it is not his own human efforts, whatever they may be, but the power of God to work irresistibly within a dead man’s heart that saves. Irresistible grace gives the pastor confidence to preach the word and evangelize, knowing that God will save his elect” (95).

4. The Perseverance of the Saints. This doctrine is a powerful incentive to holy living. Barrett writes, “Out of the five canons articulated by Dort, it is the fifth and final canon, which has the most to say about Christian piety” (108). The Arminians accused the Calvinist doctrine of the perseverance of the saints of promoting licentiousness and moral laxity. According to the Canons of Dort, however, nothing could be further from the truth. The knowledge that God will preserve his own to the end promotes personal holiness.

Barrett says, “Scripture is clear that perseverance and assurance of salvation are not a hindrance to but a supplement of ‘constant prayer and other exercises of godliness.’ Assurance that the God who sovereignly saves will also sovereignly preserve . . . is a pure and true incentive to see God’s grace effectively worked out through the indwelling fruit of the Holy Spirit” (122-123).