Can I Keep on Going? 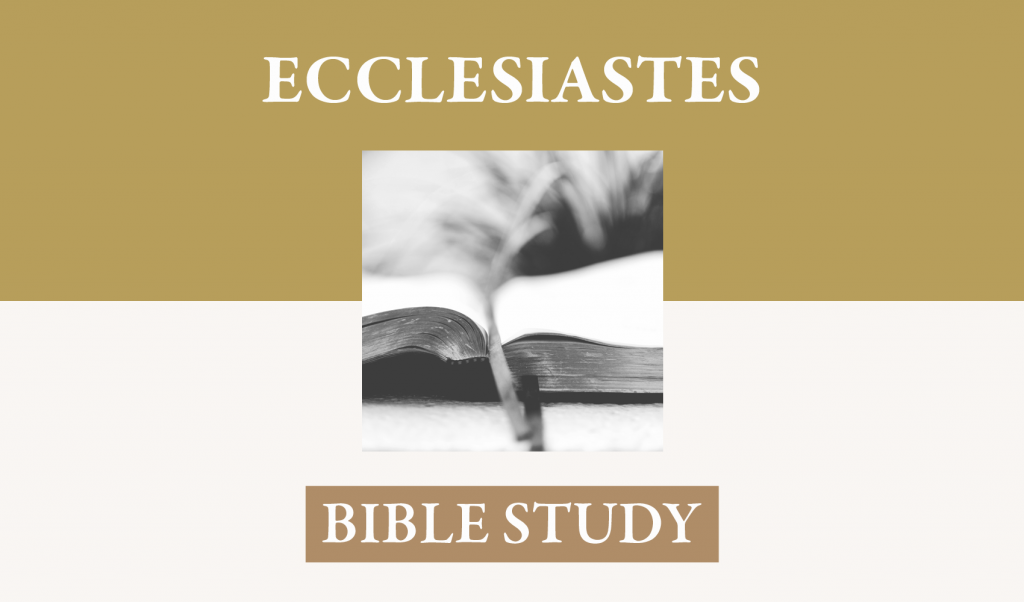 The book of First John defines the world as the lusts of the flesh, the lusts of the eyes, and the pride. It goes on to say that the world passes away and all of its lusts, but he that does the will of God abides forever. In his Spirit impressed wisdom, Solomon observed that reality working itself out before his eyes. We could consider Solomon’s observations as an extended existential Old Testament commentary on 1 John 2:15-17.

I. Chapter 7, verses 1-6 – Solomon shows that godly and wise living often values those things that are opposite of the preferences of the world.

A. A name that brings nods of respect and acknowledgement of godly virtue is far preferable to possession of the most precious material things. Even a good ointment that heals or refreshes is far from the lasting comfort and value of a good name. A good name is gained only through long and consistent practice of right and compassionate living. Job describes this in Job 29. In Job 30 he narrates the distress of losing one’s good name, in his case for no substantial reason.

B. The day of death better than the day of birth. All of us rightly rejoice at the birth of a new child. He is born, however, with a nature clogged with original sin, is by nature a child of wrath, and has before him the testing of all that a sinful, evil, and often cruel world can throw at him. The person, however, that finds life through the ransom of Christ, may say with Paul, “I prefer to die and be with Christ, which is far better.” At death his body no longer feels the oppression of corruption and decline and his spirit, now absent from the body but present with the Lord, has no more tendency to sin, is removed from any temptation to sin, sees no sin in the spirits of just men made perfect (of which group he is now a part—Hebrews 12:23, 24), and is in the presence of Christ the righteous one. Though we understandably and rightly “ooh” and “AAAh” at birth and cry and console at death, for the child of God, the latter far exceeds the former in the life into which he is being introduced.

C. Verses 2-4 – Though death is better than birth for the one that finds a redeemer and has the hope of eternal life, the intrusion of cessation of existence in the world and the termination of all earthly relations, nevertheless, brings a deep sense of loss for those left behind. The Preacher says that this shock and sadness, for those that look at it with wisdom, is instructive toward a deeper and abiding joy. Why is going to the house of mourning better than going to the house of feasting? Solomon gives us the answer.

II. Chapter seven, verses 7-14: One must learn to be patient in present circumstances and trust in the providence of God and the justice of his decree.

A. Verse 7 – A wise person, with a keen sense of justice and who attempts to do right and be equitable in all his dealings, finds the phenomenon of oppression maddening. Particularly is the situation galling and inflaming to the emotions when, not only does the mighty oppress the weak, but they use their position and wealth to bribe the officials that are appointed to protect the rights of the poor and powerless. How can God be in control when truth is on the scaffold and error holds the rope? When we look at sin and evil, including the power of covetousness, as an isolated phenomenon and see how it seems to dominate every sphere of public life and worms its way into the life of the church also, we can be distressed, despairing, and angry. The human emotions and affections must, therefore, be imbued with a larger perspective on reality—one that takes account of a perspective that is known only by the propositions of divine revelation. [It is this perspective that is opened in the first six seals of Revelation 6. The Lamb of redemption opens the book sealed with seven seals, and the first seal was a presentation of his kingship, on a white horse with a bow and a crown. He controls all the movements of the earth—the strife among nations, the presence of famine; even the death of the martyrs, fifth seal, and assures them that he has yet more wrath to bring on the earth to demonstrate the malignity of human sin and the power of his justice and holiness.]

B. Verse 8 – Though the present circumstance may appear bleak, we know that in the end God will show his justice, righteousness, holiness, and judgment and every sin shall receive its due recompense. The contrite and patient in spirit that trust in God, both as a deliverer here and hereafter, will find the end of a thing true and pure and righteous. “The end of a thing,” that is, the purpose for which God decreed it, will show the wisdom of God in working all things together for good for those that love God and are the called according to his purpose (Romans 8:28). Though we can not see the end, we nevertheless have the word of God concerning these things and will submit humbly to his wisdom rather than vaunt ourselves against God and question his ways. Any portion served from the banquet of God’s purpose and grace will be salutary and confirming to the hope of eternal life.

C. Verse 14 – In view of all these things, therefore, the person that is molded by revelatory wisdom will accept both prosperity and adversity. The one, from the standpoint of seeing prosperity as a small foretaste of the pleasures that exist at the right hand of God (Psalm 16:11), and the other as an opportunity for reflection on the shortness, vanity, and sinfulness of our own lives. God has made both of these and which of them will dominate the short future we still have in this age, we cannot tell, for God controls the progress of history in terms of his redemptive purpose—to increase wrath at times and to manifest the sovereign pleasure of mercy at others. “You therefore, beloved, knowing this beforehand, take care that you are not carried away with the error of lawless people and lose your own stability. But grow in grace and knowledge of our Lord and Savior Jesus Christ. To him be the glory both now and to the day of eternity. Amen” (2 Peter 3:17, 18).

III. Chapter 7:15-24 – Solomon reflects on the relative nature of all human righteousness and wickedness and that none can make a final adjudication of either of these in this life if the standard of measurement is one’s temporal, and apparent, well-being. Issues of wickedness and righteousness overlap in every person’s life along the spectrum from absolute good declining to complete corruption. There is an absolute good, and there is, or will be, an absolute corruption of good; neither of these, however, can be observed in any person or situation in this life

A. Verse 15 – What Solomon observed about the wicked, Job stated as a matter of long observation in his response to Zophar in Job 21. “Why do the wicked live, reach old age, and grow mighty in power? Their offspring are established in their presence, and their descendants before their eyes. . . . The evil man is spared in the day of calamity” (Job 21:7, 8, 30). Likewise, the righteous often find their temporal condition look like a manifestation of divine displeasure, As Job bitterly observed, “When disaster brings sudden death, he mocks at the calamity of the innocent. The earth is given into the hands of the wicked” (Job 9:23, 24). David, acting in wickedness, succeeded in killing Uriah, acting in integrity. Ahab, pouting because of a disappointed covetousness, found himself in possession of his desired treasure while Naboth, acting with integrity, honesty, and respect for his forefathers, found himself falsely accused of blasphemy and stoned to death, thus losing what he had protected in his integrity (1 Kings 21:1-16).

B. Verses 16 – 24 – This apparent incongruity, however, should not make us draw wrong conclusions about the realities of righteousness and wickedness in the world. We must not forget that the most righteous still have remaining sin that should be confessed and lamented and is always susceptible to divine correction. The openly sinful who seem to pass this life without judgment will be judged with absolute equity and they should not, therefore, become a model for living by anyone.